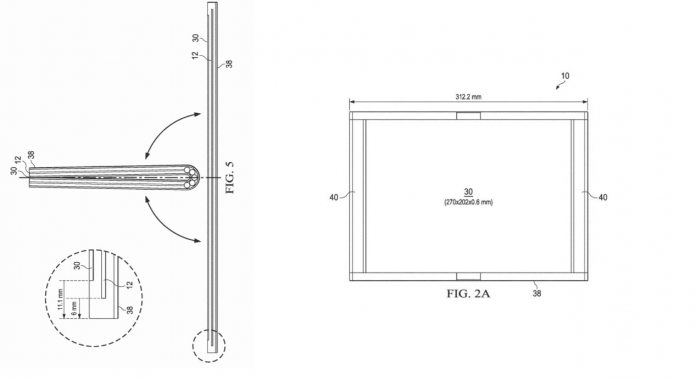 We have become used to discussing Microsoft’s various folding screen patents as the company pursues development of the Surface Phone. Like all other Surface products, the hardware would give OEMs a base to create something similar. In other words, support from OEMs like Dell is essential as the goal is to further software.

With that in mind, a newly discovered Dell patent will be welcomed by Microsoft. The documentation a foldable tablet PC that would run Windows 10 and possibly Microsoft’s Andromeda OS. In the filing, Dell describes a Windows 10 device with a foldable dual-screen.

Dell seems to be working on a 2-in-1 laptop/tablet device with an external hinge folding, and two displays. A first and second housing comprise the tablet, with the hinge connecting the two parts. One of the diagrams show this is clearly more a laptop than a smartphone, while the screen is not foldable like a roll panel.

“An information handling system having rotationally coupled housing portions supports a flexible display disposed across the housing portions with a hinge structure that manages flexible display curve radius in a folded configuration. The hinge includes plural hinge elements having an arc face, arc cavity interior and mounts that couple with hinge coupling elements. The mounts align the hinge coupling element rotational axis out of the cavity to aid in maintaining the hinge elements having no gaps during rotation of the information handling system housing portions. The hinge coupling element integrates friction plates disposed normal the rotation axis to generate torque for managing housing rotational movement,” Dell explains.

Back in May 2018, we discussed Dell’s ongoing work on its Janus device, which will be a smartphone-sized product with dual screens.

Earlier this month, we reported on another Dell patent which described a dual-screen laptop that would allow monitors to be connected through magnetic strips.