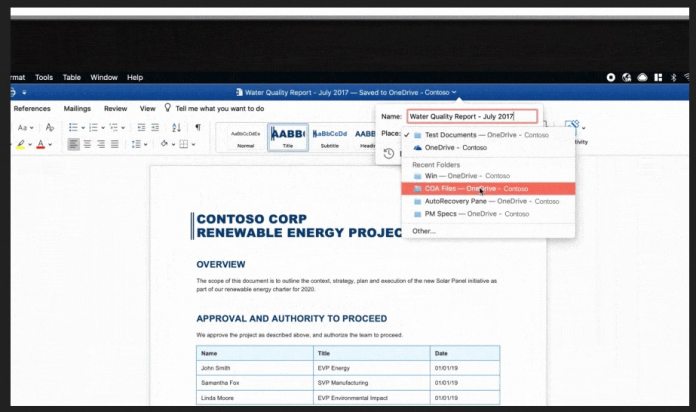 Many people creating documents on Office 365 will save their creations and think little more about it. However, it is surprisingly easy to save a document on Microsoft cloud productivity suite. To help users avoid unwanted document loss, Microsoft has made OneDrive or SharePoint Online the default save location on Office 365.

Of course, there are way to protect an Office document from simple forgetfulness. Users can set Office apps to automatically save content. Still, accidents happen, machines break, and documents get lost.

By using SharePoint Online or OneDrive, content is stored in the cloud and kept safe. The new default save will be functioning alongside Known Folder Move (KFM), a feature that was released last year. KFM gives users the ability to simply move folders to OneDrive.

The new save features now places OneDrive in the default saving window for “Location”. Microsoft says here users can change the title as they would any other document. Equally, users can choose another saving location if they want.

Last week, Microsoft rolled out its January update for Office 365 Insiders. New features included in this update include:

“The accessibility checker is one such change, letting Word, PowerPoint and Excel users quickly determine if a document meets the needs of all employees.

Microsoft is also making it easier to find files in these applications. Users can now type keywords in the search box in the back page to find what they need.

In Excel, we’re also seeing the rollout of @mentions. The app recently gained support on iOS and Android, so communicating across devices should be possible. As with mobile, you can also add comments on Excel and grab co-worker’s attention with a built-in reply box.”