The hope for a Microsoft-branded foldable smartphone just hit a little bump. The company has announced an end to Microsoft Wallet, its tap-and-pay service. The app will be retired on February 28, 2019, ending what some will see as a necessary smartphone feature.

The app’s sunset coincides with the general wind-down of Windows 10 mobile after the failure of the Lumia line. With the loss of the service, some are wondering if the company’s Andromeda device is still on the table.

Much of Windows 10 Mobile disappearing, so it’s likely the company will either significantly revamp the exclusive apps that have merit. It’s well worth noting that while Microsoft Wallet is dead, Microsoft Pay is still kicking.

The service is in some ways a multi-platform successor to Wallet, though it’s currently focused on the Edge browser. It’s possible this service could be adapted to support NFC.

It stands to reason that Microsoft would use this rebranded service instead of outdated naming from past failures. Wallet was always temperamental for users, not supporting many cards or regions. It’s possible this service could be adapted to support NFC.

Still, the truth is that the company’s plans around Andromeda are still very much in the air, with some reporting the project is ‘on hold’.

However, Microsoft is thought to have a second foldable that’s unlikely to require a contactless payment service. Rumors pin Project Centaurus as a Microsoft Courier-like notebook device for the purpose of productivity.

Centaurus will allegedly run Windows Core OS and make use of 32-bit Windows programs. It would act as a journal when laid flat, but transition to a laptop-like experience when folded in that orientation.

According to Windows Central, it’s this device that’s the priority for Microsoft now. It seems a safer bet and should give time to work on a different payment solution or adapt an existing one. The Andromeda foldable may never reach the public, but the sunset of an old payment service isn’t a particularly strong indicator in either direction. 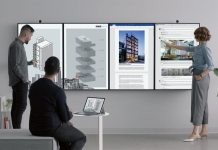