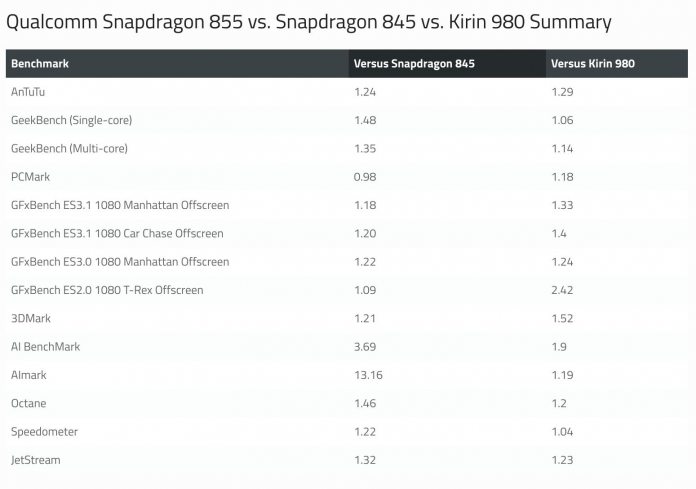 One of the things to love, or indeed hate, about the smartphone market is it is constantly moving. The marketing trick of convincing consumers to buy the latest and greatest each year at least means companies must innovate. Qualcomm is involved in the cycle with its perpetually updating Snapdragon CPUs.

Qualcomm is always developing beyond the current generation on the market. With that in mind, we are looking ahead to the Snapdragon 855. This will be the company’s flagship smartphone CPU for the second half of 2019.

Flagship handsets launching at the end of this year will boast this chipset, so it is interesting to see how development is progressing.

Qualcomm announced the Snapdragon 855 in December but has remained quiet since. That is changing this week as the company has published some benchmark results. The early news for the system-on-chip is promising.

XDA used Qualcomm’s reference device running the Snapdragon 855. If you unfamiliar with these devices, they are essentially blank smartphones used in testing. The handset in question was running Android 9 Pie and included 6GB of RAM.

In the testing process, XDA put the 855-powered device against Google’s Pixel 3 (Android 9, 4G RAM), and the Huawei Honor Magic 2 (Android 9, 8GB RAM). In terms of competition, the Pixel 3 runs Qualcomm’s Snapdragon 845, while the Honor Magic 2 has Huawei’s own Kirin 980 under the hood.

Across familiar benchmarking tools like PCMark, GFXbench, and AnTuTu the 855 performed well. It completely outperformed the 845, which should be expected. The chip also bested Huawei’s chipset, most notably on graphics performance.