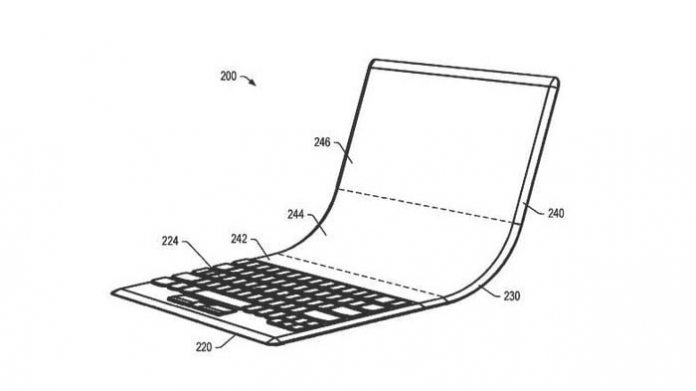 A recently published patent indicates that Lenovo is at least thinking about foldables. It’s unoriginally titled ‘Device with Foldable Display’, but the document has some interesting ideas.

Rather than the typical foldable tablet, Lenovo is looking at a device with a keyboard attached to the display. The device’s screen would fold on top of the keyboard, much like a regular laptop.

With this method, Lenovo could forgo the need for a hinge, though it has its own drawbacks. The area left by the fold would mean a larger footprint when folded, and there are already physical hinges that can bend in both directions.

One advantage would be the ability to have a display that’s longer than keyboard section but can be folded higher up for easy transport. Lenovo mentions that the display could be 50% longer than the keyboard, either cutting down on wasted space or enabling taller aspect ratios. The bendiness of the display could also enable different positions relatively easily.

However, with the unsightly gap, it’s unclear if this is something consumers would go for, especially considering the expense that’s likely. Ultimately, this a patent, with no guarantee of an actual product, but previous rumors did suggest Lenovo was crafting a Surface Andromeda competitor. It’ll be interesting to see if Lenovo can overcome any obstacles and deliver a unique device.