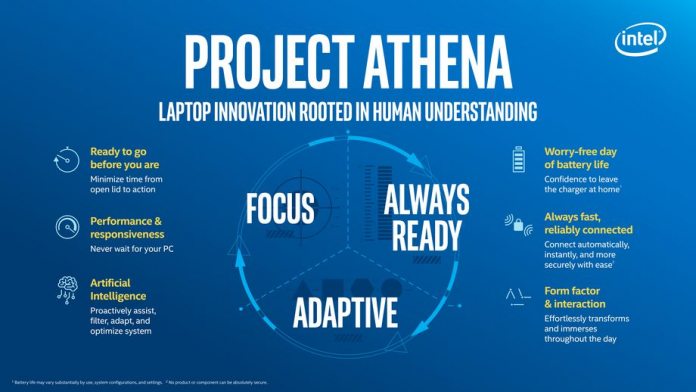 So far, Microsoft’s Windows 10 on ARM aspirations have been tied to Always Connected PCs and a collaboration with Qualcomm. Middling reception of Qualcomm Snapdragon-powered ARM-based Windows laptops have not dampened Microsoft’s vision. Intel’s newly announced Project Athena may be the answer to Microsoft’s problems.

Announced this week, Project Athena is seeking to usher in the next generation of computing devices. Intel wants to guide PC manufacturers towards “a new class of advanced laptops” with annual specs that companies must match to get certification.

Yes, this sounds very much like Intel’s industry drive towards Ultrabooks. In 2010, when the company set up specifications that would be required to make an Ultrabook, companies responded positively. In fact, the Ultrabook craze really took off and most consumer-grade laptops could be deemed Ultrabooks these days.

Perhaps more importantly than trying to find a new marketing name, Project Athena is also promising to push the industry into the Always Connected PC era. Qualcomm may have gotten the Windows 10 on ARM ball rolling, but Intel is the company with the PC expertise.

The company promises a Project Athena computer will boast all-day battery life, will always be connected through cell connectivity, be transformable (2-in-1, folding screens), and have wide capabilities with artificial intelligence.

Ultrabooks gave us thin and light, extra-portable laptops, but Project Athena seems more focused on capabilities than aesthetics. Still, Intel is being typically vague about what we can expect. The company has not said specifically which specs a company will need to fall under Athena requirements.

For Windows 10 on ARM, it could be an answer to Microsoft’s prayers. Qualcomm is still a niche name in PC, despite being a dominant chipmaker in mobile. There has been a feeling that Intel would have to throw its weight behind the Always Connected PC ethos to make it a real success. Not least because the first generation of Always Connected PCs disappointed.

It is worth noting Microsoft will not have Athena all to itself. Intel says the project will also be available for Google Chrome laptops. Still, Windows remains the dominant desktop platform, so the benefits for Microsoft may be large.

Intel says it wants the first Project Athena devices to come to market in the second half of 2019. If the likes of HP, Lenovo, Samsung, Dell, Asus, and Acer take notice, Windows 10 on ARM could be about to take off.