Samsung will launch the Galaxy S10 within the next two months. This is the 10th version of the company’s flagship range, a series that has put Samsung at the top of the smartphone pile. Clearly in celebratory mood, the company will be offering variants of the S10, such as the Galaxy S10 Lite.

Of course, a light version of a smartphone usually means lowered specs and a reduced price. According to a GeekBench score for the Galaxy S10 Lite, the device does not seem to be performing well.

Before continuing, it is worth reading to the end of the article because there is a caveat to the information presented by the benchmark. Firstly, the data seems to confirm the S10 Lite will be powered by Qualcomm’s Snapdragon 855, while there is 6GB of RAM.

On GeekBench, the Galaxy S10 Lite scored 1986 in single core and 6266 in multi-core. Both these scores are unimpressive and actually low. 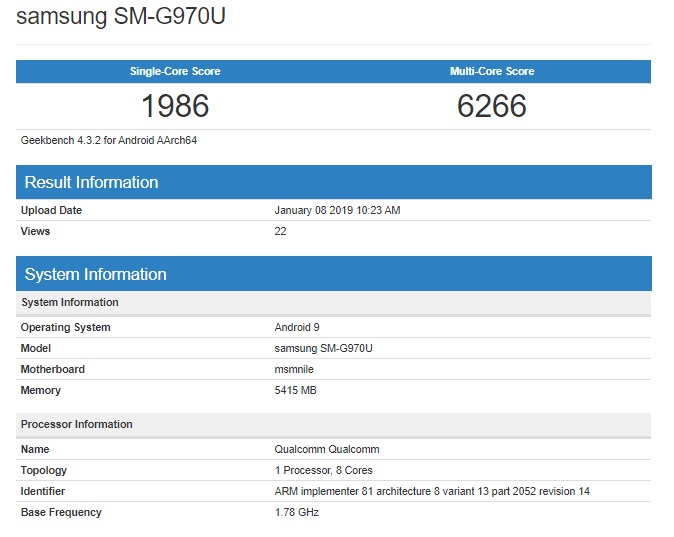 Here’s the caveat. Samsung is of course only beginning the benchmarking process and may only be testing for efficiency. We often get fooled by pre-release benchmark scores, or even post-release scores.

We have seen many times a device score a poor benchmark but perform excellently in real-world scenarios. Naturally, there is no knowledge about how the Galaxy S10 Lite will perform when it is launched. In other words, take the benchmark with a pinch of salt.

As for the launch of the S10 Lite, it is expected to be launched in late February or early March. As a 10th anniversary device, we expect big things from Samsung and hopefully a few technological surprises as well.