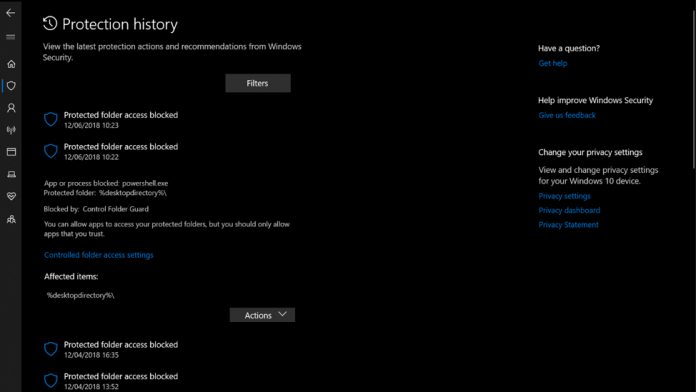 Microsoft is preparing to bolster its Windows Security app with the next major feature update. Insiders have noticed some new additions to the OS that should help to improve the security of general users while giving them more insight.

The most significant addition is protection history, which is exactly what it sounds like. Windows Security will give users greater detail about threats and actions, alongside Windows Defender detections. One of the additions in this regard is the ability to see protected folder access blocks.

Microsoft is also doing its part to ensure security features aren’t tampered with. Features like Windows Sandbox are a strong addition, but not if attackers can modify or circumvent them. Tamper protection limits the changes that can be made outside of the Windows Security app to prevent misuse.

These additions are available now in Windows 10 Insider build 18305 and will presumably launch with Windows 10 191H. So far, the focus of the update seems heavy on security, a good thing considering the number of high-profile hacks in the past year.

In addition to these features, Microsoft will finally address the Spectre CPU flaw properly. The update will implement Google’s Retpoline fix, which mitigates the issue without the 5-30% CPU performance hit.

Aside from security features, 191H will ship will a new Office app and possibly a Windows 10 Light mode. More than anything, though, critics are looking for some much-needed stability, with the past two updates delayed due to critical bugs.

You can find more information about Windows’ latest security features on the official blog.