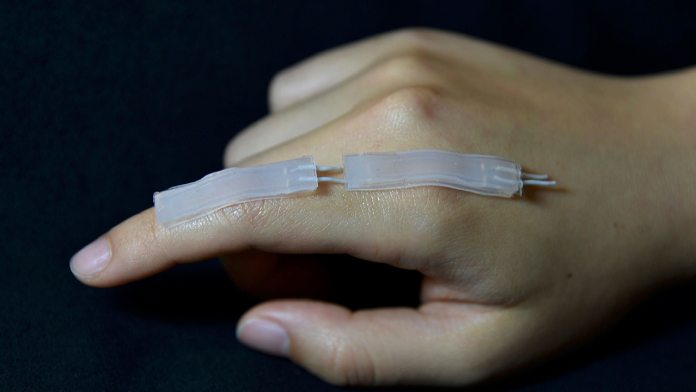 Harvard announced its own sensor off the back of IBM’s high-tech fingernail chip. Unlike the tech giant, its solution ditches a metal in favor of a ‘biocompatible’ solution.

The so-called ‘soft sensor’ is made of a non-toxic, highly conductive liquid that’s more suitable for everyday use. This is particularly important given one of the device’s intended functions – monitoring sick children.

“Children born prematurely often develop neuromotor and cognitive developmental disabilities,” explained Harvard’s Leah Burrows. “The best way to reduce the impacts of those disabilities is to catch them early through a series of cognitive and motor tests. But accurately measuring and recording the motor functions of small children is tricky. As any parent will tell you, toddlers tend to dislike wearing bulky devices on their hands and have a predilection for ingesting things they shouldn’t.”

According to Harvard’s researchers, its new conductive liquid is no more dangerous than a drop of salt water. It’s also a fourfold better conductor than previous solutions like sodium chloride-glycerol.

However, the compound holds some other benefits. As well as being non-toxic, it’s soft nature is suited well to those with sensitive skin. This is a trait seen often in premature babies, for whom detailed data can help with diagnosis and evaluate cerebral palsy risk.

Paper author Scientist Siyi Xu also says the potassium iodine-glycerol solution is stable across a range of humidity levels and takes just 20 minutes to prepare. Harvard is now looking for commercialization opportunities for its sensors, which are likely to have merit in a number of scenarios.