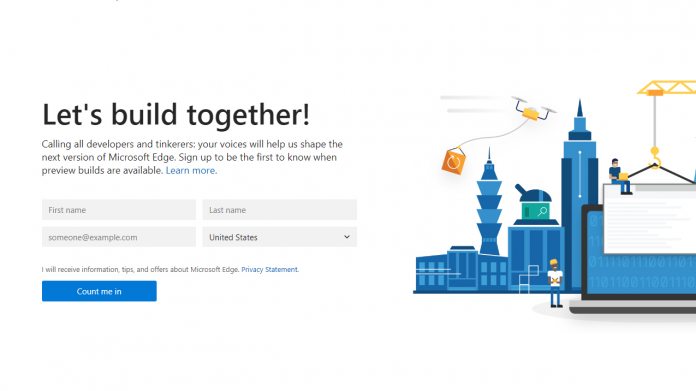 Microsoft has opened beta sign-ups for the Chromium variant of Edge, with the first builds expected to ship to testers in early 2019. Signing up now will guarantee that your name is on the list and you’ll be notified when builds are available.

The company is yet to announce any terms for the preview builds, including if you’ll require the latest Windows version at the time. Theoretically, though, these builds shouldn’t be as tied to the OS now that EdgeHTML is dead.

Chromium Edge should have several benefits over its predecessor. Perhaps most critically, Microsoft has confirmed that Edge will gain access to all of Google Chrome’s extensions. While Edge had been catching up in recent years, its range was still below that of the competition.

Regardless of whether it’s intentional or not, accusations have recently arisen surrounding the slow down of Google sites on other browsers. On Chromium, Microsoft should be able to avoid this.

Microsoft has been clear to promote these positives, as well as the move to “support open source”. However, there are also concerns about the move, namely that it will give Google a near-monopoly on aspects of the web.

Browser engines are notoriously difficult and expensive to develop, but each tends to bring a unique approach. Firefox’s Gecko Quantum allows for multithreaded processing for very fast rendering of graphics. EdgeHTML has a very close link to Windows’ system resources, bringing numerous benefits.

With the switch to Chromium, the differences may be less pronounced, giving consumers less of a say in the direction the web evolves in. For competing browsers like Firefox, it could spell a hard time, with it barely being worth a developer’s time to optimize for it.

Whatever the case, we’re excited to see what the change in the engine will bring. In an ideal world, it will remove much of the instability and sluggishness. You can sign up for the beta here.

Windows 10: How to Use Internet Explorer Mode in Microsoft Edge (IE Mode)