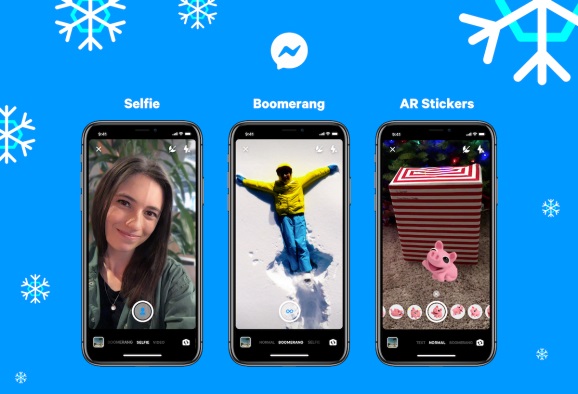 Borrowing from a rival is perhaps a bit cheeky when it helps your company grow. However, when all companies fall under a single umbrella, it’s probably ok. For example, Instagram borrowing Snapchat’s Stories feature and riding it to huge success… cheeky. Facebook Messenger borrowing a camera feature from Facebook-owned Instagram… ok.

That’s what has happened, with Messenger taking a property from Instagram that allows the former to have new camera effects.

Facebook Messenger has two new camera modes that were first available on Instagram. The first is Boomerang, which loops videos through simple interaction. The other popular Instagram camera feature heading to Messenger is Selfie Mode. As the name suggests, Selfie Mode puts a quality emphasis on the subject of the image or video.

These features are embedded into a slightly refreshed UI experience on the Facebook Messenger camera app. Five modes are listed at the bottom of the screen: Boomerang, Normal, Video, Text, and Selfie. Facebook and Instagram users will recognize this layout as it is used on those services. Messenger would previously display filters in this position.

Users are increasingly using multiple applications that do similar things and value a clear ecosystem from companies that develop numerous services. We have seen Microsoft attempt to universalize its services to create a more singular user experience.

Facebook has largely avoided this tactic until more recently. However, it still feels like the company’s core services are fairly distinct in look and feel. Few would be confusing Instagram with WhatsApp.

Still, it seems the company is now moving towards a more consistent look and feel. At least in the camera app, Facebook, Messenger, and Instagram are now virtually identical.