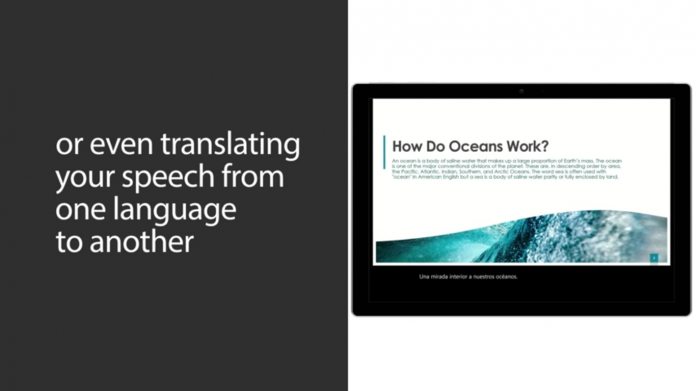 Microsoft is planning a cool new standalone feature for PowerPoint in Office 365. The company will introduce subtitles and real-time captions to the app starting early in 2019. Adding these abilities to PowerPoint will provide several benefits, such as aiding the deaf or hard of hearing.

PowerPoint will also be able support translations of presentations to subtitles through the feature. In terms of live captions in real-time, the app will support 12 spoken languages and be able to display more than 60 languages on screen.

As you may expect, Microsoft is using its developments in artificial intelligence to power the feature. Indeed, the company has been using similar machine learning tools on its own presentations in recent years. So, when you see a Microsoft event, it is likely this AI is underpinning the presentation experience.

By shifting the technology to an Office service, Microsoft is handing the abilities to users. In terms of presentations, PowerPoint users will be able to customize subtitle appearance. The AI can adapt its speech recognition on the move to account for terminology and other nuances.

If you use PowerPoint, you may know this kind of functionality is already on the app. However, Microsoft has been using an add-in to offer this feature before. Now, the AI will be directly integrated into the service.

Microsoft is likely to bring the real-time captions to PowerPoint on Office 365 in late January. The feature will be available on Windows and Mac.

The news of a real-time AI-powered caption generator comes just days after Microsoft announced its AI-Editor will come to PowerPoint this December.

Through this feature, spellchecking will be improved. PowerPoint will be able to give users suggestions to maintain clarity, concision, and flow. It’s powered by the previous implementation in Word, which has been popular with users.