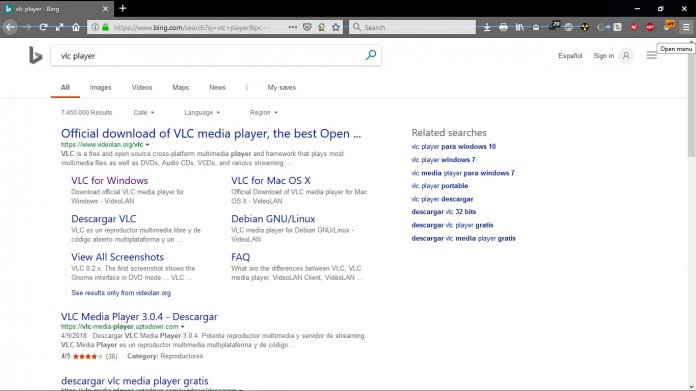 In terms of open source services, few are as reputable as VLC Player, the hugely popular media player. So, we can file it under “curious” that Microsoft Bring search decided to flag the VLC media download page as “unsafe”. However, that’s what happened, and Microsoft has now said its search engine made a mistake.

Users heading to the VLC media page via Microsoft Bing were wanted the website was “suspicious” and were advised to avoid entering it. The warning claimed the site was hosting “malicious software”.

Bing presented the warning as such:

“Site might be dangerous. We suggest you choose another result. If you continue to this site, it could lead you to malicious software that can harm your device.”

Supposedly, @bing now consider vlc-3.0.4-win64.exe as a malware, which gives an annoying popup.
This appeared 2 days ago, and we have no clue how to fix it (yet).
We've checked, and the binary has not changed and is still correctly signed…
.
tbc…

It seems for whatever reasons; the Bing Site Safety Report feature was falsely triggered. This tool became part of the search engine in 2014 and warns users about potentially unsafe websites. It is worth noting Bing is no longer flagging VLC as unsafe, and the company says it does not know what happened:

“We have absolutely no clue what happened. Nothing was changed on the binaries (easy to check), or on the websites,” wrote Jean-Baptiste Kempf, VideoLAN (VLC owner) president, in an email response to questions. “We can just think about a false-positive in an updated anti-virus checklist. This happens from time to time. We have no other idea.”

Microsoft explained the situation off as a simple mistake: “Out of an abundance of caution, security protocols may return false positives at times. When this happens, and a URL is confirmed to be safe, we unblock the site.”

You may be wondering what the fuss is about. A mistake was made, and Microsoft cleared it up, so we can move on. Well yes, of course, but it would be a wider problem if Bing started flagging legitimate sites. VLC Player is the gold standard in media player software and Microsoft could do without the bad press.

Bing still trails Google Search by a vast (and insurmountable) distance and needs all the goodwill it can get to stay relevant. These kinds of gaffs don’t do the search engine any favors.