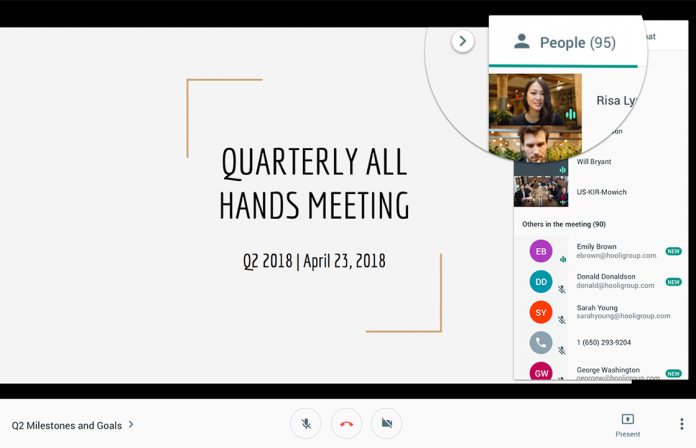 Google has doubled the limit of G Suite’s Hangouts Meet platform, allowing up to 100 people to video call at once. The tool makes up one arm of Google’s enterprise Hangouts offering, the second being Hangouts Chat, a Slack and Microsoft Teams Competitor.

Comparatively, Skype for Business supports up to 250 video participants, with one able to share video at a time. The same applies to Microsoft Team’s ‘meetings’, though only 20 can participate in a ‘private chat’.

Either way, it’s a large upgrade from Meet’s previous limit of 50, and may actually see some use. Calls of over 100 people are rare, so it’s unlikely users will run any issues with the new limit.

“This new extended participant limit supports people joining from any mixture of video and dial-in entry points so you can flexibly bring together even more people from all over the world,” said Google in a blog post.

Hangouts Meet also makes use of advances from YouTube to offer live streaming, which lets CEOs and executives broadcast meetings to up to 100,000 in a watch-only nature.

The upgrade comes exactly a year after Google upgraded Hangouts Meet from 30 participants to 50. It’s worth noting that while enterprise customers will have a limit of 100, it’s a different story for those on Business or Education tiers.

Instead, those subscribers will get a boost from 25 to 50, which is still a significant upgrade. Some may notice the changes already, with the new limit rolling out slowly over the next few days.