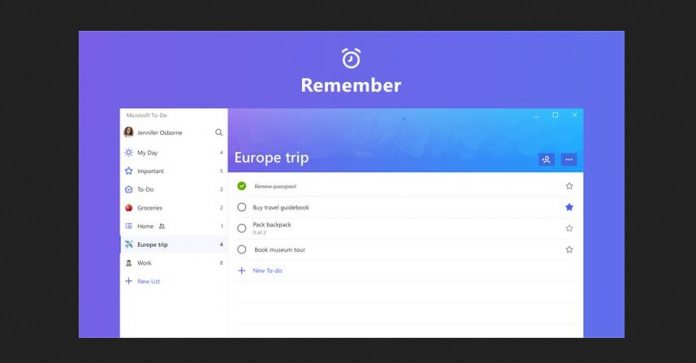 The love is continuing to show upon Microsoft To-Do. Redmond has issued yet another update for its task management application, this time with a new integration on Windows 10. Earlier this year, Microsoft released an integration for its Windows 10 Mail and Calendar in preview. That internal testing is now reaching all users.

At the moment, the feature is only available to Insiders in preview. However, it should move through the Insider program swiftly and reach end users on Windows 10 soon.

Microsoft is extending its To-Do app as an integral part of its consumer Outlook branded suite of apps on for Windows 10.

“Mail & Calendar (Version 11001.20106): It is now easier to keep track of your tasks from Mail and Calendar in Microsoft To-Do! With the latest Mail & Calendar update from the Store, we’ve added the ability to switch directly to To-Do in our app navigation. This update is rolling out to both Insiders and Retail users as we speak.”

Microsoft To-Do has been given red carpet treatment this year as Microsoft has made it an increasingly important part of Outlook. Just this month, Microsoft has integrated Cortana into To-Do and made changed to its Planned lists features.

In recent months, To-Do has gained some interesting features. Microsoft has added this year are Hashtag support, recurring tasks on iOS to Shared Lists and a Star Rating system.