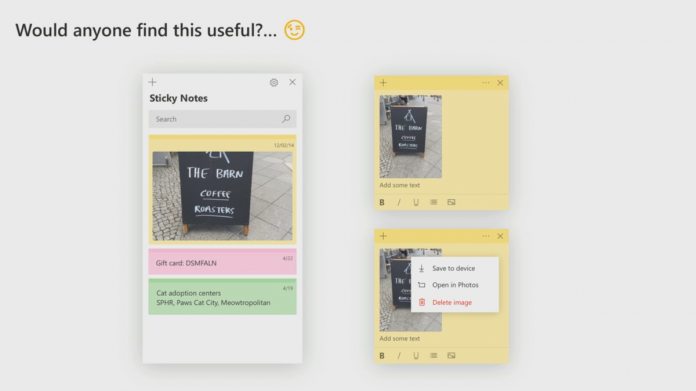 Microsoft has been putting a lot of weight behind Sticky Notes during 2018, expanding the functionality of the feature. Most of the changes have through the preview and release of Sticky Notes version 3.0, which is now in the wild.

However, Microsoft is not slowing down, and Sticky Notes will continue to evolve. Microsoft software engineer for the Windows Insider team, Jen Gentleman announced an upcoming feature release.

Taking to Twitter, Gentleman teased the ability to add images to notes. While Gentleman did not expand on details, we guess the feature would work as you would expect. Users should be able to attach images from their personal files on a phone or PC.

This is a very interesting addition that once again expands the usefulness of Sticky Notes. It was only last year that I used to peg the app as fun but pointless. Since then, Microsoft has thrown features at the service at a regular pace.

The result is an app that is becoming increasingly useful as a note-taking and task-management service.

Earlier this month, Microsoft brought Sticky Notes to the web through OneNote. The browser version of the service is available at https://www.onenote.com/stickynotes. Users can sync notes across all devices through their Microsoft Account. As for the experience, users are getting the same feature set that’s available on Sticky Notes for Windows 10.