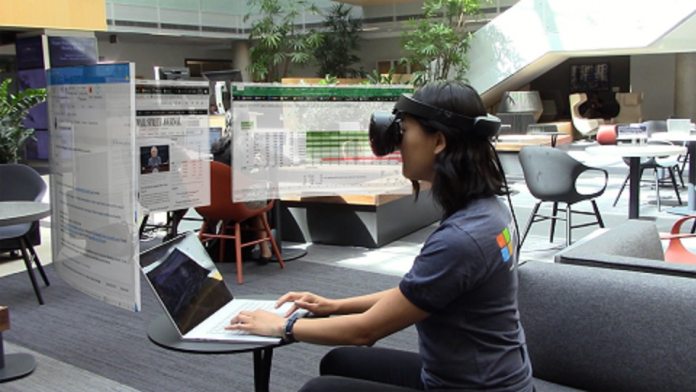 At its core, Mt. Rogers creates additional virtual displays. Users could either have a display much larger than their PC would allow or create numerous displays, such as one for each app.

Microsoft explains Mt. Rogers is designed to enhance productivity in mixed and virtual reality situations. By using a head mounted display, users can create as many displays as they need. Furthermore, the company promises infinite screen space if needed:

“The Mt. Rogers research project is focused on improving traditional productivity tasks in mixed reality environments. It allows users to put on a head-mounted display and surround themselves with as many virtual monitors as is useful.

“Thus Mt. Rogers offers infinite screen real-estate in a portable and private manner. Our project goals are superb text readability, efficient user input and user comfort. By achieving these goals, Mt. Rogers can function as an effective monitor replacement while giving users access to the full Windows desktop and applications that they already know and love.”

One of the problems with traditional VR displays has been limited resolution, which makes text reading difficult.

We have already seen Microsoft make moves towards clearing up display capabilities in mixed reality environments. Earlier this year, the company patented technology that upscaled refresh rates on 60GHz HMDs to 120GHz.

With Mt. Rogers, the company created new technology to ensure it could increase resolution. One of those developments saw Microsoft create a cemented doublet, which fuses two lenses together for better optical aberration corrections.