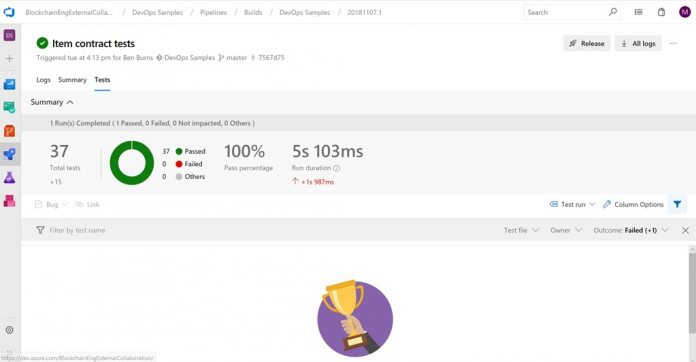 Microsoft’s Azure Blockchain solution has been used in numerous integrations in recent years. Now the company wants developers to access the service and create their own solutions. This week, Microsoft announced a new Azure Blockchain Development Kit (SDK).

By leveraging the SDK, developers can integrate Microsoft’s blockchain technology with third-party SaaS. The company says it created Azure Blockchain Development Kit as another part of its serverless technology.

The idea of the SDK is to provide an extension of the Azure Blockchain Workbench. Developers can use this service to set up, deploy, and manage a consortium network. Among the integrations in the SDK are off-chain identity, Azure services, and monitoring, messaging, and data APIs. All of the features can be used in the creation of blockchain-based services.

“These tools have become the first step for many organizations on their journey to re-invent the way they do business. Apps have been built for everything from democratizing supply chain financing in Nigeria to securing the food supply in the UK. As patterns emerged across use cases, our teams identified new ways for Microsoft to help developers go farther, faster.”

Developers will also find plenty of sample scenarios to highlight how the service can be used. Among those samples are inbound and outbound SMS, IVR, IoT Hub and IoT Central, Xamarin mobile client for iOS and Android. Dynamics integration via Common Data Service (CDS), bots and assistants (Cortana, Alexa, Google Assistant) and web UX.

“The Azure Blockchain Development Kit is the next step in our journey to make developing end to end blockchain applications accessible, fast, and affordable to anyone with an idea. It is built atop our investments in blockchain and connects to the compute, data, messaging, and integration services available in both Azure and the broader Microsoft Cloud to provide a robust palette for a developer to realize their vision.”