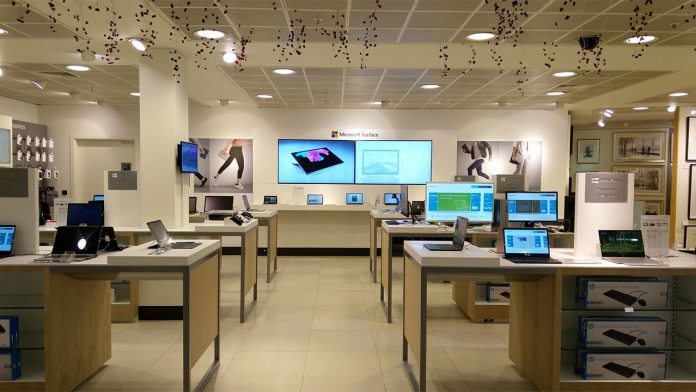 A Microsoft area has opened in a UK John Lewis store, offering Surface devices and accessories. Located in Chelsea, London, it will let customers view the physical products while development continues on a full Microsoft Store in Oxford Circus.

To be specific, the John Lewis is located near Sloane Square and is fairly small. As well as Surface devices, there appear to be HP and Dell PCs. There are also various keyboards, mice, backpacks, and webcams.

The merch is complimented by large TV screens espousing the benefits of the Surface line, with Chrismas decorations seemingly already in place.

It’s long past time Microsoft Stores began to appear in the UK. Though there are a few stores outside the US in Canada, Puerto Rico, and Australia, Europe is yet to get a single dedicated store.

We've opened our own bespoke Microsoft area @JLandPartners near Sloane Square in London, where you can get your hands on all the latest #Surface products. Drop in and say hi! pic.twitter.com/kSKEPum1Ye

As a result, the Oxford Circus store will be the first in Europe and placed firmly in the heart of London’s shopping industry. Unfortunately, though many would have you believe the UK revolves around London, it’s too far a journey for some.

This partnership with John Lewis could solve that in the short-term, should its other stores adopt the same model. A ‘Surface Wall’ is already present in a London Westfield shop, so it wouldn’t be too much of a leap.

Of course, UK customers have been able to order online for some time, but the physical aspect is often essential for laptop and 2-in-1 purchases. Before they shell out thousands, it gives customers the opportunity to test build and display quality, keyboard feel, and size.

For the meantime, the Microsoft area in John Lewis achieves that, though it’s probably not worth traveling out of your way for.