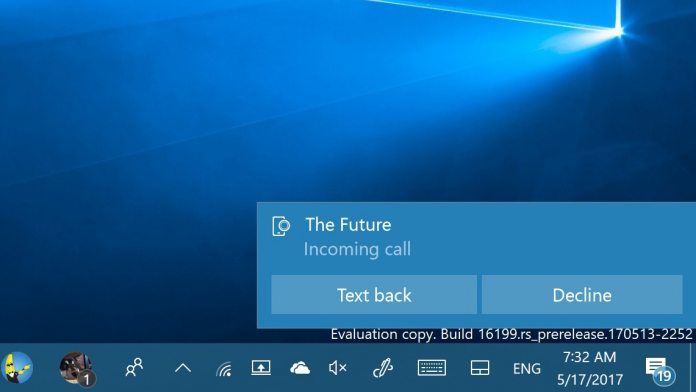 With the Windows 10 October 2018 update, Microsoft introduced Your Phone. The app is a huge step forward for Android users, letting them sync photos and text messages from their phone to their PC.

For Microsoft, it’s a way to keep its users staring at its OS. For users, it’s a major increase in convenience. According to Aggiornamenti Lumia, there are now hints that phone call mirroring will debut in the OSes next update.

The publication claims it has discovered references to a ‘Windows.CallingShellApp’ that will enable the functionality. Official strings from the discovery include ‘Transfer to PC’, ‘Send to Phone’, and references to dial pad, Wi-Fi connections, and more.

If the interpretation is correct, we may see this in Windows 10 19H1. It would let users answer on their PC when they already have a headset, or make a phone call directly from the PC.

Interestingly, though, there also seem to be references to a dual screen device. A line reads “Fold the device over to return the call”.

The obvious implication here is Microsoft’s rumored foldable device, Andromeda. There have been multiple references to the device from a number of sources, but it’s still not clear if it will be a phone/tablet hybrid or a portable laptop.

The string seems to suggest the former, but it’s too ambiguous to put much faith in. It’s also worth noting that though this has surfaced now, it may not necessarily launch with Windows 10 19H1. It wouldn’t be the first time Microsoft has delayed a major feature, or put the building blocks in early.

With hope, we’ll see this application appear in upcoming Insider builds, where it’s functionality will become clear. Either way, it’s strange that Microsoft would release this as a standalone app, rather than integrate with Your Phone.