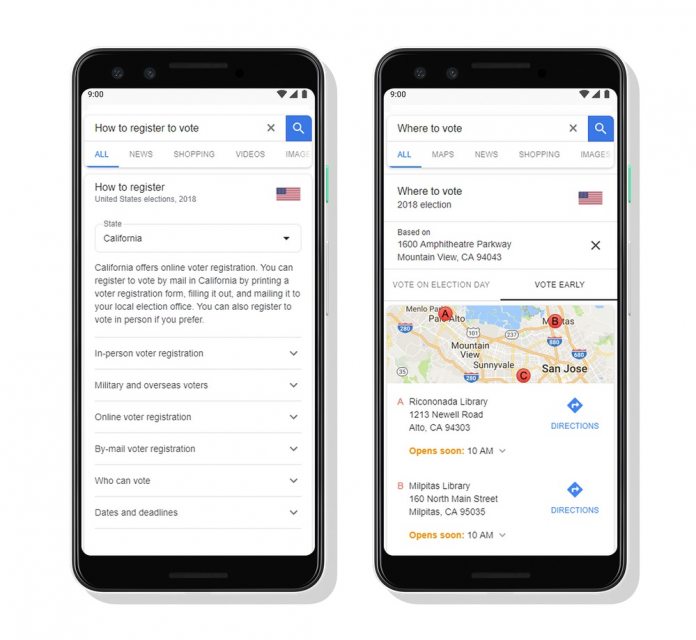 Today, people in the United States are heading to the polls to vote in the country’s Mid-Term elections. In a divided political climate and the closeness of the last Presidential Election, the mantra “every vote counts” is of increasing importance. To drive that point home, Google and Microsoft are turning their search engines to entice voters.

Donald Trump won the Presidential Election in 2016 at the expense of Hilary Clinton. However, Trump did not win the popular vote and many analysts believe Clinton would have won if more people had voted.

Whether you believe Trump’s presidency is the result of voter apathy or something more is unimportant. What is important is that people vote if they have the ability to. At least, that’s what Microsoft and Google are saying.

On Bing’s homepage, Microsoft has removed its traditional Bing Images in favor of a banner that reads “It’s Election Day. Vote!”. To help people who want to vote, the search engine has a “voter information” tab in the trending box. This button allows easy access to learn about the voting process.

On Google Search, the Google Logo has been changed to “Go Vote”. Quick cards have been put in place for users to perform quick vote-oriented queries. Additionally, Google says it will make it simpler for users to learn who is on the ballot in their local area.

“To help you make knowledgeable decisions about your ballot, we’re making information about candidates and ballot measures readily available. If you search for any federal or gubernatorial candidate, a panel of information will appear on the results page.

“This will include candidate-authored statements about platforms and legislative priorities for all campaigns that have chosen to post them. Likewise, a query for any statewide ballot measure will render a panel of information and the full text for that initiative,” Google’s Jason Wheeler wrote today.