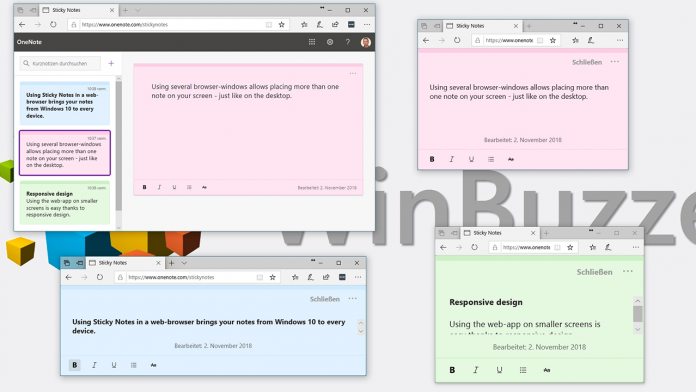 Microsoft’s renewed attention to Sticky Notes has spawned a web version. After sweeping changes to the app earlier in the year, it’s now available on any device.

In a roundabout way, it fulfills the company’s promise to bring the app to mobile devices. The app scales down well, while also providing quick access to those on a desktop with limited permissions.

The app contains much of the functionality of its desktop counterpart. It allows for text formatting and coloring in a modified web interface. Importantly, the notes sync from the app to the web, though it often requires a refresh to catch up.

In the other direction, though, syncing is automatic. Notes on the web appear in the desktop app after a few seconds, taking with them the same coloring and formatting. Obviously, it would be nice for the web version to sync without input, but it’s unlikely you’ll be using both at once anyway.

On desktop, users could theoretically use Sticky Notes web as an app replacement. Those on Chrome OS, Mac OS, or Linux can resize their browser window and place it on their screen. It’s not an ideal solution, but Microsoft has clearly thought about this, the sidebar minimizing automatically.

Interestingly, Sticky Notes web comes under the OneNote section of Microsoft’s website. The two tools are both similar, though the former is much more casual and simplistic. It lines up with a previous announcement that Sticky Notes wouldn’t be receiving a bespoke app on Android.

Instead, Sticky Notes fits available via a new tab in the OneNote app. Given Note’s focus on simplicity, it feels like a strange move. You’ll have to download an unrelated app to access the functionality and jump through interface hoops to access it.

As a result, the web app acts as a good bridge, letting you access Sticky Notes hassle-free. However, it doesn’t have the ability to place widgets on Android, which would be a big help. We hope to see this as part of the OneNote implementation, as it isn’t currently there.

Meanwhile, Insiders received several additions to the Windows 10 app, including a dark mode and faster syncing.