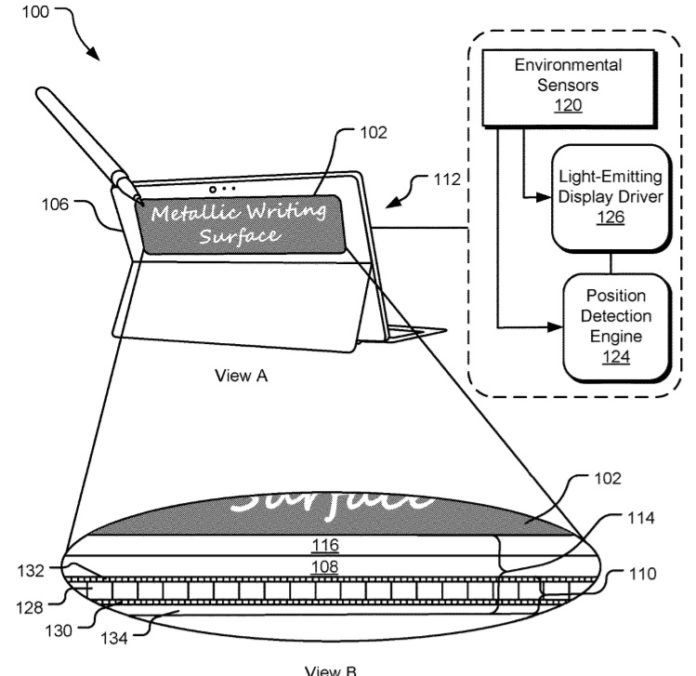 Over the years, there have been plenty of rumors about Microsoft working on a folding screen or dual screened device. This has usually been depicted as a smartphone called the Surface Phone, running the companies Andromeda software. Microsoft dual-screen experiments have shown up in a new patent for a Surface Pro device.

However, this does not seem to be the same kind of functionality hinted at by the Surface Phone and Andromeda. You may remember the Surface Phone has been teased for much of this year. However, Microsoft has also reportedly decided to make Andromeda a more stable tablet device.

Firstly, this patent does not look like it is Andromeda recast in a tablet. Instead, it shows a Surface Pro lookalike that has a smaller second screen. That secondary display is called the “REFLECTIVE DISPLAY” per the naming of the patent.

It is worth noting Microsoft filed for this patent way back on May 1, 2017, although it was only published by USPTO today. As you can see from the image above, the filing describes a Surface Pro device with a display on the back.

Microsoft’s abstract highlights how the secondary display would be implemented:

“Implementations described and claimed herein provide a reflective multi-layer structure that serves as a supplemental or primary display for an electronic device. In one implementation, the reflective multi-layer structure forms an external surface of the electronic device and includes a light-emitting display that is separated from the external surface by a dielectric polarizing film and a diffuser. Light emitted by the light-emitting display is transmitted sequentially through the dielectric polarizing film and the diffuser to present information on the external surface.”

As we always say with new Microsoft patents, there are no guarantees this will be release. In fact, it looks like just the sort of patent that shows the company experimenting. Microsoft has been working on second screen designs, and this may have been one idea. It will be interesting to see if this reflective display ever makes it to actual hardware.