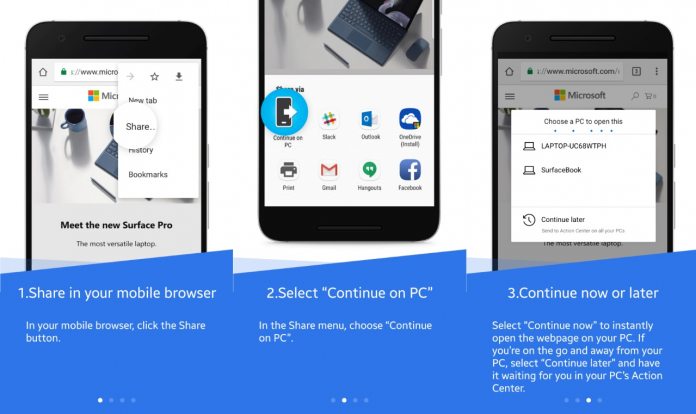 Microsoft has been expanding its ability to connect Windows PCs with smartphones. Your Phone is the latest play in this area. However, Continue on PC for the Android Microsoft Launcher is the core service for browsing across phone and computer. Not wanting to be outdone, Google is reportedly working on its own Continue on PC feature called Self Share.

If you are unfamiliar with Continue on PC, it is an Android service that also integrates with the Microsoft Launcher.  Microsoft’s ‘Continue on PC’ functionality lets users switch near-seamlessly between phone and computer straight from the home screen. Selecting a recent file presents users with the option to launch it on their desktop with only a short delay.

The feature is extremely useful for those who often work on the go, letting you carry on where you left off. This also applies to photos, so you can take a picture and see it instantly on your desktop.

One problem with Continue on PC is it only works through Microsoft Edge on Windows 10 PCs. That’s a problem considering Edge’s browser market share is about 4%. Clearly there is room for Google to muscle in on this area as Chrome is the dominant browser.

If the company can integrate a similar feature into Chrome across devices, it could be a problem for Microsoft. Such an ability could work from Android to Windows through Chrome and be available to many more users.

Restricting users to Edge was probably Microsoft hoping such features would attract more users to the browser. As that hasn’t happened and Google is sniffing around, perhaps Redmond will open Continue to PC to other Windows browsers.

Google’s Self Share will also function on Mac and Linux, according to a report from Geeklatest. If a user is logged into Chrome on PC and Android, they will be able to share tabs seamlessly.