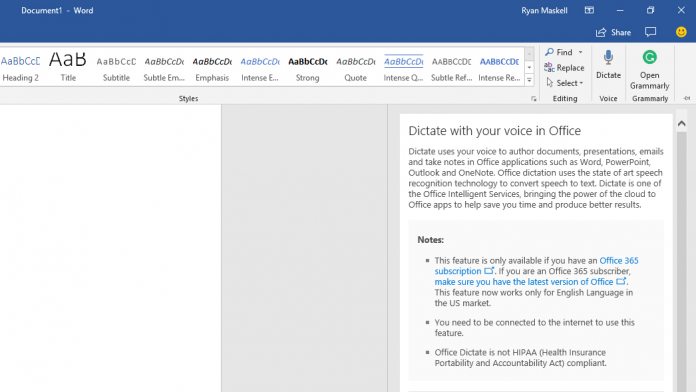 Earlier this year, Microsoft rolled out dictation to Word for desktops. Starting as a Garage project, Dictate for Word moved through preview and then arrived on Office 365 for PC. Now, Microsoft says the feature is coming to web versions of its productivity suite.

Currently, Dictate is available for Microsoft Word and OneNote and will launch on the web in a few weeks. Microsoft says the core of the feature is to help people who struggle to understand written content, such as users with dyslexia.

Now that the feature is coming to Office web apps, it will likely become more appealing to schools. Microsoft says PowerPoint, Excel, and Outlook will receive Dictate in 2019.

Dictate falls under the company’s Office Intelligent Services division and is an easy enough tool to use. There is now a dictate button in Word and OneNote, pressing it allows you to speak the words you want in the document.

Microsoft advises clear speech in a conversational tone, allowing Dictate to understand punctuation automatically. However, if some punctuation is not understood, it can be entered via speech. For example, less used punctuation marks like semi-colons, new lines, and question marks.

If you’ve ever used a dictation service before, you may know accuracy is variable. We are not quite at the stage where speech to text is perfect. To improve Dictate in Office, it is important to set up your microphone properly through Windows Settings.

Microsoft says quality will depend on how quiet the environment is and the specs of your microphone. You’ll also need to be online to use it.

Inputted speech will also be gathered by Microsoft and used to compile a unique dictionary, and generally to improve the service. If this makes you uncomfortable, you can disable the feature by unticking Office intelligent services in options. 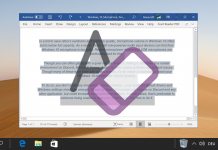 How to Remove or Clear Formatting in Microsoft Word