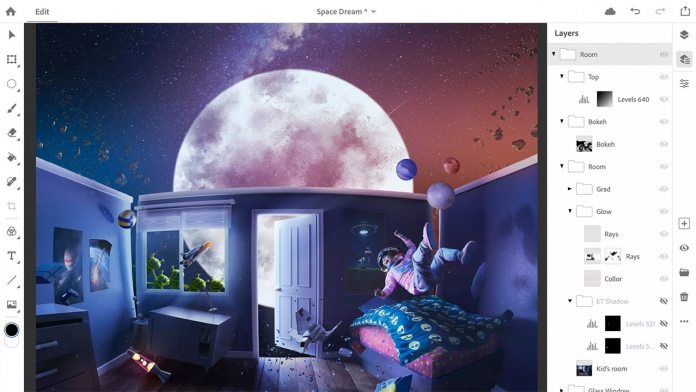 After a report in July, Adobe has confirmed that it will be releasing a fully-fledged Photoshop app on iPad in 2019. The release will remove the program’s historic restrictions on the tablet by bringing CC functionality.

Users will be able to open and edit PSD files directly on their iPad, with access to features like content-aware fill, masking, brush improvements, and much more. Further, the app will support easy syncing to the desktop due to their same code base.

Despite this, Photoshop CC for iPad will feature a touch-oriented interface. Though the layout will remain similar, button sizes have been increased and UI elements adjusted for a smaller screen. Thanks to the latest i9 Chip, the experience should be fast even on documents with lots of layers.

A Shot at Microsoft Surface

The inclusion removes a significant draw for Microsoft’s Surface Pro line, which is able to run full Windows 10 versions of the apps. Though it’s just one Adobe app, previous reports suggest the company is looking at Illustrator, too.

However, sources say that support for other apps is a way out yet, and may not even make 2019. As a result, it’s likely Surface will remain the platform of choice for creative tablet users, especially considering its access non-Adobe tools.

In the future, though, companies may wise up. Adobe’s strategy is similar to Microsoft’s with Office 365, which was hugely successful. With the iPad Pro targetting productivity much more directly, it’s a matter of time before other developers cash in.