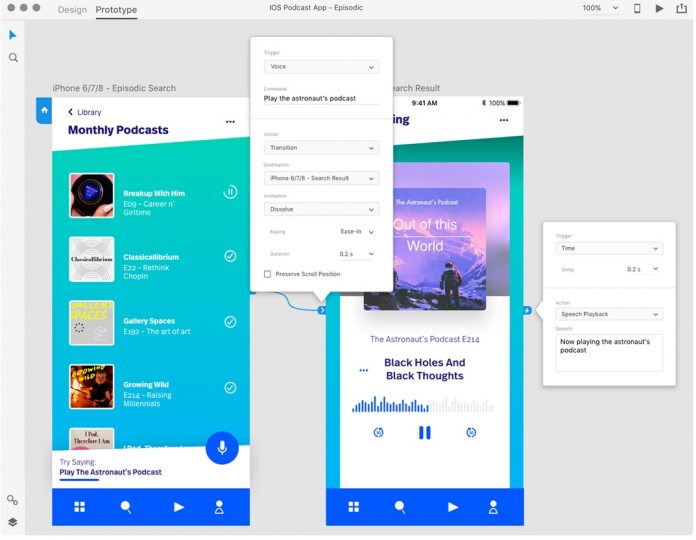 Adobe XD has been expanded to support voice applications. The integration is powered by Sayspring, a company Adobe acquired earlier this year. Designers creating apps in XD can now use voice triggers and speech playback.

If you’re unfamiliar with Adobe XD, it is a platform for developers to design and test UIs and applications. Back in August, the service was integrated into Microsoft Teams, allowing developers to collaborate more efficiently.

Adobe says the Sayspring team has been working on smoothly integrating voice support since joining the company. The result is a developer experience that is not too far away from any other app creation.

“Voice is weird. It’s both a platform like Amazon Alexa and the Google Assistant, but also a form of interaction […] Our starting point has been to treat it as a form of interaction — and how do we give designers access to the medium of voice and speech in order to create all kinds of experiences. A huge use case for that would be designing for platforms like Amazon Alexa, Google Assistant and Microsoft Cortana.”

Adobe admits it needed the expertise of Webster and his team as previous attempts to integrate voice failed. Indeed, the company says customers were expanding to voice experienced and it needed to keep pace. It is clear bringing voice to Adobe XD was a major component in the purchase of Sayspring.

There other new additions to Adobe XD for October 2018. The platform now supports a range of plugins, such as task automating and third-party tools. Speaking of automation, XD will now auto-animate, allowing developers to utilize complex animations without necessarily needing the expertise.

In terms of new tools, Adobe XD Drag Gestures gives dev’s the ability to re-create drag gestures in mobile apps. Deeper integration with Adobe Illustrator is also on board the October 2018 release.