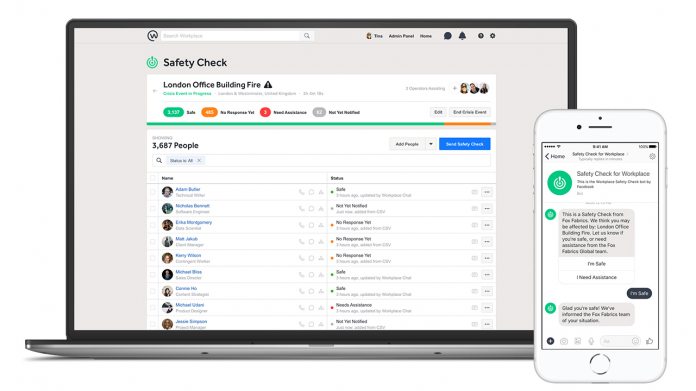 On the back of several natural disasters and terrorist attacks, Facebook introduced a ‘Safety Check’ feature in 2014. The idea was to give families a quick way to check on their relatives, and the social media’s wide reach turned it into a very effective solution.

Since its release, Facebook says millions of people have used its feature, with over 2,000 activations. Notably missing though, was enterprise. Unless you want your employees on social media idea, using the traditional platform isn’t a great way to get quick responses.

As a result, Facebook is introducing Safety Check to its Workplace app, and with it comes some significant upgrades. Companies will be able to create their own Safety Checks, send notifications to users for a quick response.

“Our data shows that the most effective way to reach people is via a Workplace Chat Bot. But because not every organization has this functionality, we’ve also provided out-of-the-box options including Workplace Chat notifications and automatic messages,” explains Workplace’s Sabrina Morsello. “These appear at the top of the News Feed in Workplace alongside email and, eventually, SMS. All of these will be available on both desktop and mobile.”

To monitor those requests, there’s a real-time dashboard of employee status and contact history. The service will try to contact a user multiple times in different ways if they don’t respond, with the ability to manually uncover their contact information or that of their co-workers.

Facebook believes this will lead to a situation where checks will take hours rather than weeks. It’s unlikely companies will throw out their existing systems overnight, but it could be a great alternative to slow, spreadsheet-based solutions.

Facebook says Safety Check for Workplace will be available next year, but organizations can request early access already. One tester is Delta Airlines, which used the feature during Hurricane Florence.