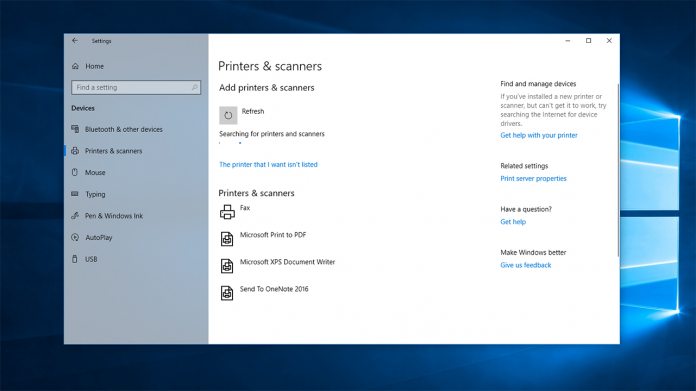 Microsoft won’t’ include printer drivers in Windows 10 version 1809 to reduce the OS footprint. In a bid to reduce storage requirements, users will have to download drivers via Windows Update before they can print documents.

This replaces the previous technique, which shipped basic scanner and printer drivers with the image. The company said the change will have ‘no noticeable impact’ in most cases, but it could prove an annoyance for some users.

Essentially, some users will need an internet connection before they can access basic functionality like printing. Thankfully, that’s not an issue in much of the globe, but connections are intermittent in some regions.

Of course, many printers will come with a dedicated disk with bespoke drivers, greatly reducing the impact. Additionally, Windows will support Mopria compatible WiFi printers without the need for internet.

Once users do have a connection, Microsoft makes it pretty easy, delivering drivers via an automatic Windows Update.

How Popular is Mopria?

As Microsoft mentions, most modern Wi-Fi printers are Mopria compatible. HP, Canon, Samsung, and Xerox founded the Mopria Alliance in 2013 to push for a universal printing standard. Big players like Epson and Lexmark have since joined.

Mopria is clearly the way forward, enabling printing from mobile devices and more. However, adoption still isn’t universal. There are currently 3,000 models that support it and 120 million deployments.

The simple fact is that general consumers don’t update printers regularly, instead waiting for their previous one to break. As a result, this move could be an issue for some users, but should soon fade.

Unfortunately, Microsoft hasn’t revealed the space users will save due to the removal. It’s unlikely to be a huge amount, but its removal makes sense. Undoubtedly, the company will trim back in other areas so that the overall savings are quite large.

Microsoft has been trimming the size of its updates in recent times, with builds weighing almost half. It also works on Windows 10 Lean, a trimmed down version that comes in at 6.5 GB instead of 12.

Microsoft Rolls out a Cumulative Update to Windows 10 1809 Users