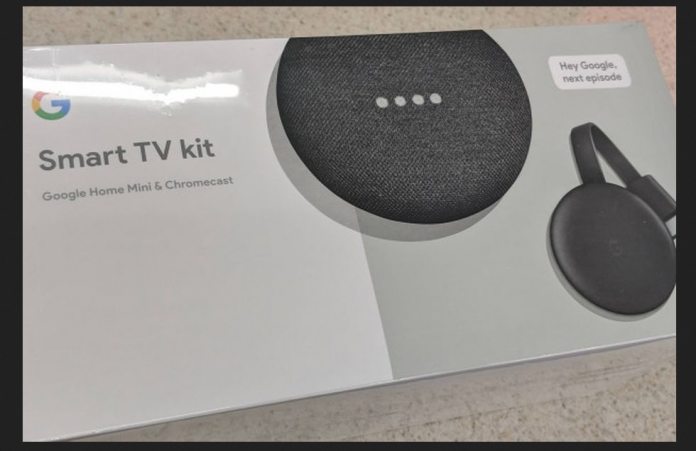 Microsoft and Apple have already held their hardware events for this year, as has Samsung. That leaves Google from the tech giants. Next week, the company will announce its new Pixel devices. We expect to see new Pixel smartphones and Pixelbook laptops. However, Mountain View will also launch its Google Smart TV kit.

A Redditor discovered the Google Smart TV kit on an official website. It has since been removed by the company, suggesting someone at Google pulled the trigger too quickly. There is speculation that an employee of Walmart leaked the kit. It is unclear if this was accidental or on purpose.

Of course, Walmart has the exclusive on the old Google Smart TV kit, so this makes sense. In terms of the new package, it is a bundle that holds the Chromecast streaming dongle and Google Home mini. The later device is the company’s smart speaker technology with smart home integrations.

The difference between this kit and the previous one if the addition of Google’s new Chromecast dongle.

It is worth pointing out this is not a confirmed product. Luckily, we won’t have to wait long as Google will unveil its new hardware on October 9.

While Google will likely announce a new Pixel smartphone, we are excited about the Pixelbook 2. The new laptop will feature Chrome OS, but Google has apparently been working on a dual-boot OS with Windows 10.

Dual-boot to Windows 10 has been predicted to come to the Pixelbook 2, which still seems likely. It seems Google is taking the feature seriously and will also bring it to its Project Nocturne Pixel Slate. This is the company’s Chrome OS packing tablet, which will likely also get Windows support.