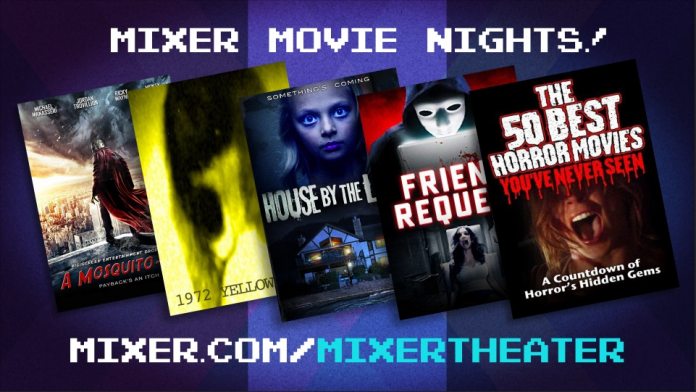 Microsoft’s game livestreaming service Mixer is getting in the mood for Halloween with a horror movie stream series. The company says it will livestream horror movies on the Twitch competitor every Saturday this month.

“We’ll be starting off with Mixer Movie Nights in October, with two showings of a different wonderfully spook-tacular horror movie each Saturday (and again on Halloween).”

Heading to Halloween, Mixer users will see movies twice a day on Saturday’s. Showtimes are 11pm PST and then 4pm PST. It’s worth noting most of the movies are hardly triple A titles. However, we guess horror buffs will find something of interesting.

The movies available on Mixer are 1972 Yellowhouse, House by the Lake, A Mosquito-Man, Friend Request, and The 50 Best Movies You’ve Never Seen.

Grab your 🍿 and join us for some 👻 and 😱 every Saturday night this October for Mixer Movie Night, showtimes at 11am PT and again at 4pm PT!https://t.co/a4QVKjP0T1 pic.twitter.com/BqvH3IAyke

More important than the available titles is the promotion itself. This represents the first time Microsoft has streamed movies on Mixer. Certainly it points to a wider plan where the company will expand the service to include movies and TV shows.

Back in August, Microsoft brought a major feature to Mixer, allowing Xbox One users to broadcast anything in a stream.

Previously, if a game crashed mid-stream, Mixer would present a screensaver display with two astronauts. Now gamers can choose to show their Xbox One Dashboard. Users are urged to remember if this setting is available everything that they see will also be broadcast to their audience.