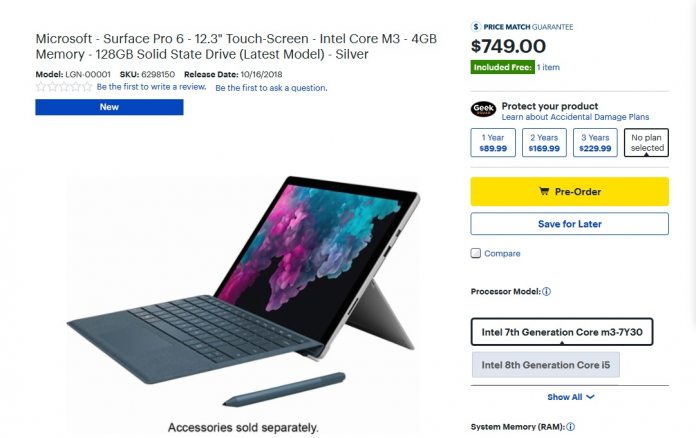 Earlier this week, Microsoft introduced its new Surface Pro 6. The company confirmed the device will ship from October 16 and will cost from $899. That’s the most affordable Surface Pro ever, but it seems there is another Surface Pro 6 with a more appealing price tag.

While we though the $899 model would be the entry level, but Neowin reports there is a more affordable model. The lowest Surface Pro 6 on the Microsoft Store comes with an 8th-gen Intel Core. However, retailers like Best Buy are also listing a $749 model with a 7th-gen Intel Core M3-7Y30.

This is the same dual-core processor in last year’s Surface Pro entry-level machine. At first, we though perhaps retailers have just made a mistake by calling this device the Surface Pro 6. However, a closer look shows the device comes with a new model number (LGN-00001).

So, is Microsoft just being a little cheeky by repackaging last year’s model as a Surface Pro 6? Maybe, but it still means users can get a Pro for $749. It is worth noting this device comes with Windows 10 Home instead of Windows 10 Pro.

The $899 Pro 6 comes with Intel’s 8th generation Core CPU and a 267ppi screen. Elsewhere, the Surface Pro 6 can be configured with up to 16GB of RAM and a 1TB SSD. Microsoft says it enhanced thermal control to allow the first implementation of a quad-core CPU in a razor-thin device.

Weighing just 1.7 pounds, the Surface Pro 6 is sleek. However, Microsoft has still managed to get 13.5 hours of battery life from the 2-in-1.