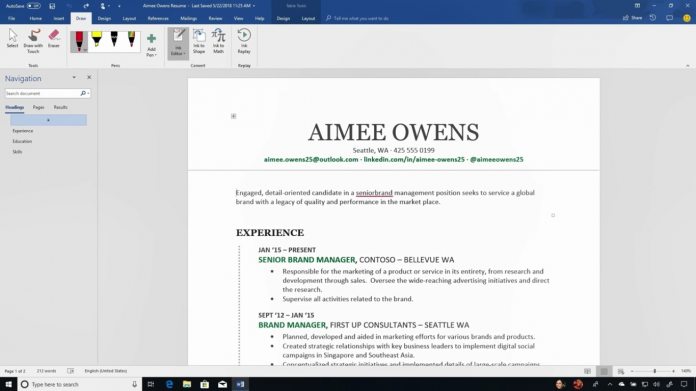 Microsoft has been pushing inking capabilities on its services since Windows Ink arrived with 2016’s Windows 10 Anniversary Update. Yesterday at its Surface event, the company expanded on inking in Office. Specifically, Microsoft wants artificial intelligence (AI) to improve inking across Office applications.

Thanks to an updated Ink Editor in Windows 10, new pen commands provide more functionality with a pen, such as Microsoft’s own Surface Pen. Among the abilities added to Microsoft Word are word joining, splitting, and editing line breaks. Additionally, it is now possible to add new words with the pen.

“If you like the flexibility of editing Word documents using digital pen, we also have some great updates for you. Using Ink Editor, you can already do things like remove and highlight text. Today, we’ve added new pen gestures that make editing a document from start to finish easier, including adding line breaks, inserting new words as well as splitting and joining words.”

Other Office apps are also gaining added inking support. PowerPoint now has a better Designer feature. Specifically, the Designer leverages AI to automatically translate your handwriting to the screen. Furthermore, the feature will also recommend slide designs on the handwritten ink.

PowerPoint is also receiving support for 3D model animations and 3D Embedded Animations. More than 30 animated models have been added to PowerPoint.

Microsoft has not put a firm date on all these updates, although some of them are on Office 365 right now. As for others, the company says they will arrive at different times.