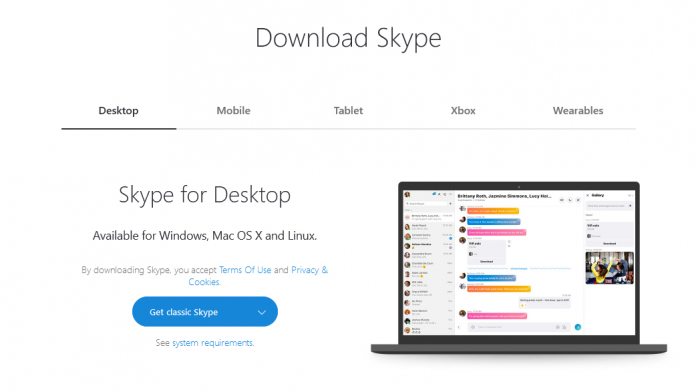 After a brief period of respite, Microsoft has announced the November removal of Skype Classic. According to the company, its team has been working hard to get missing features into Skype 8, with the recent addition of call recording.

“You’ll soon be able to add phone numbers to existing contacts, have more control over your availability status, and more,” said a Skype spokesperson. “As we continue to focus on and improve Skype version 8, support for Skype versions 7, and below will end on November 1, 2018 on desktop devices and November 15, 2018 on mobile and tablet devices.”

Despite the end date of November 1, Microsoft recommends users upgrade immediately. Failing to do so could result in interruptions, with users set to receive an email by the end of October.

The team is working on a number of other requested features, including performance improvements, a keyboard shortcuts guide, secondary ringing devices, font-size settings, and more. After Skype Classic sunsets, Microsoft will add a resizable left pane, talking indicators for large calls, easy camera switching and more.

While some will be happy with Microsoft’s additions, others will feel the removal of Skype Classic is too soon. Skype Classic was first removed in February due to a security flaw. It returned in March, before being announced for removal in July.

In August, Microsoft agreed to extend Classic’s lifetime while it worked on reaching feature parity. In all, it’s been a rollercoaster for the community, and despite the three month grace period, there will be a number of features missing.

It’s worth noting that Skype has good reason for the change, though. Skype 8 and above run on Microsoft’s new cloud services architecture, which enables a number of features. These include group video calling on mobile and video messaging.

As such, maintaining a single client on a different architecture is becoming a slog, and limiting the features Microsoft can add due to compatability. Though many are happy with Skype the way it was, competition from the likes of WhatsApp, Discord and Facetime have conviced the company to modernize its app.

It’s unclear what ‘interuptions’ Microsoft is referencing, but it would be wise to install Skype 8 just in case. Thankfully, mobile users will get a slightly longer grace period, with service ending on November 15.