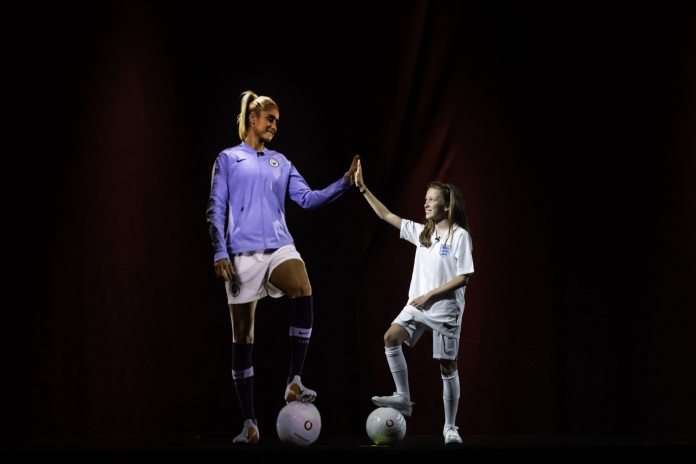 Microsoft has often sold us a vision of the cool things mixed reality (MR)through HoloLens can achieve. From integrating applications into the real-world environment, to fully immersive experiences. British telecommunications giant Vodafone is experimenting with innovative technology that can truly show the extent of HoloLens capabilities.

The company is pushing a technology that will truly show just how immersive HoloLens and MR can be, especially in conferencing situation. Vodafone says it is using Microsoft’s headset to create holographic phone calls through a 5G network.

While only at a test phase, a report from Engineering and Technology shows that the technology is functional. Indeed, it was used to create a virtual-world call between a soccer fan with the captain of the Manchester City Women FC team.

Despite being nearly 200 miles apart, the 11-year old girl was able to connect to the player through HoloLens. Using mixed reality, the pair could see each other and even interact in a limited way. Using output on HoloLens, the conversation was also viewed by a live audience.

Opening the Future of Communication

Not only did this demonstrate how conference calls in mixed reality can allow users to see each other, it also showcased other abilities.

For example, HoloLens can be leveraged for long-distance training, conferencing, and meetings. The power of 5G, which is rolling out globally now and in the UK this month. The new connection standard will propel these kinds of integrations.