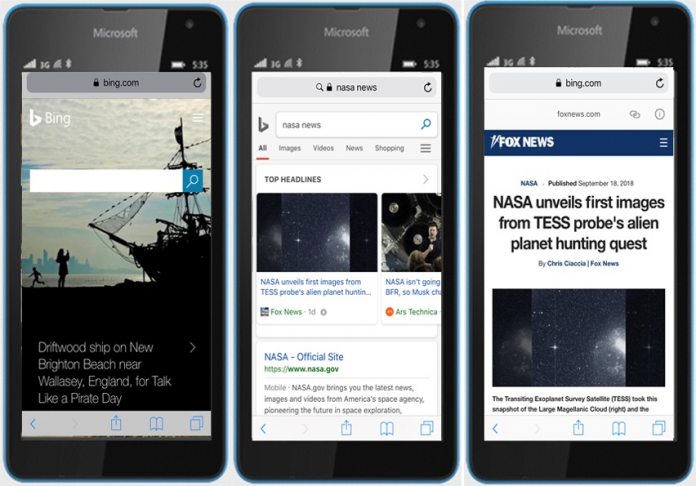 Microsoft has announced its Bing search site now supports Google’s AMP webpages. This has been a slow burn adoption considering Microsoft joined the open-source development back in 2016. The company has been offering AMP on its mobile Bing app for some time, and is now moving it to desktop.

Accelerated Mobile Pages (AMP) are a Google-led project for creating webpages that are faster and more responsive. Reducing loading times through caching techniques is the main benefit of AMP. In terms of Microsoft, the company will now integrate support directly into Bing on the web.

Users will now see a lightning icon at the top of websites that already support AMP. Pages that do support the project will now load faster than websites that do not. Another benefit is quicker performance on slow network connections.

Microsoft explains that the access is limited to the United States for the time being:

“On Monday, the 17th we started the first phase of the global roll out of this AMP viewer and AMP carrousel in the United States for the news carrousel. We will continue the phased roll out to more web sites, more countries and regions and other links in the search results pages.”

So, global users will have to wait, but that’s now standard for Bing features. The search engine still has a foothold market share in the U.S., but not in other markets. It stands to reason Microsoft focuses on its core market first.

As mentioned, Microsoft joined the Accelerated Mobile Pages push back in 2016. That was an integration on Bing for Android and iOS. AMP is integrated primarily in the search function of both iOS and Android. As results are loading, the Bing App checks if each article has an AMP page.

Now on the web, AMP is available as a viewer and Cache in Bing. Microsoft says users need to give Bingbot permissions to enable AMP content:

“In order to enable your AMP published content within Bing, you need to allow the Bingbot (our crawler) to fetch AMP content and allow cross-origin resource sharing (CORS) for bing-amp.com domain.”