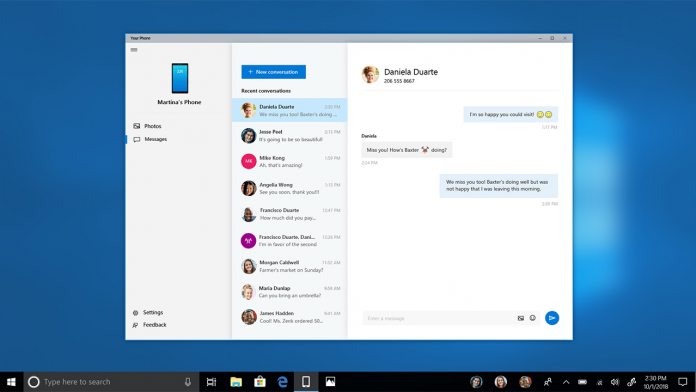 Microsoft has released Windows 10 build 17755 to its Fast Ring Insiders, bringing a major feature to Your Phone. Last week, we reported that the addition of SMS support for release preview users, and it’s not available to those on the fast ring.

For Android users, it means the ability to read and send texts straight from the PC. You can make use of Windows 10 to handwrite your message, dictate, and more. Unfortunately, the app will no longer be coming to iOS after a lack of support from Apple. It also lets users automatically sync images to their PC for editing.

Another significant change is the removal of the build watermark in the bottom right corner. According to Microsoft, this doesn’t mean the next Windows update is finished, but it is nearing completion. Insider head Dona Sarkar says that the team has started to check the code in preparation for final release.

Aside from that change, build 17755 mostly contains fixes and minor improvements. This again signals that Microsoft is putting the final polish on the build, though there are some known issues still:

You can read a full explanation of the changes on the Windows blog.