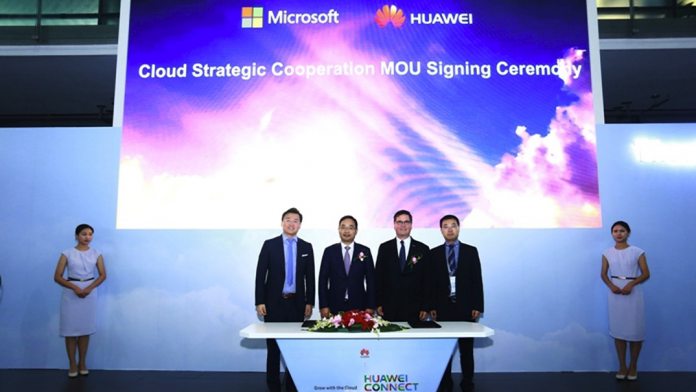 Most western tech giants are focused on crashing the Chinese market. For Microsoft, that means trying to get its various technologies and services adopted in the country… such as Windows 10. However, a potential collaboration with Chinese tech manufacturer Huawei may give Microsoft a more organic in-road into Chine.

According to The Information, Microsoft will partner with Huawei to build the company’s AI chips. Specifically, Microsoft will use Huawei AI processors to help power its China-based datacenters. It is worth pointing out that the two companies are said to still be in negotiations on the deal.

If a collaboration is made, Microsoft may court some controversy in the United States. Huawei is banned from developing and using technology in the U.S. die to concerns over backdoor spying for the Chinese government. The two companies already collaborate on a cloud app ecosystem.

In 2012, a congressional report highlighted concerns the Chinese government could leverage companies like Huawei and ZTE. The result has been an effective ban on Huawei telecom technology in the country. Other countries have followed suit, such as Australia, where the company was banned from the 5G network last year.

Also in 2017, the Chinese giant was rocked by another corruption scandal. Executive Teng Hongfei was accused of taking bribes from non-government entities and was placed under investigation. Huawei requires its employees to take a loyalty oath and also rewards those who abide the law.

The results of the oath seem dubious considering seven executives have been accused of distributing internal information to smartphone brand Coolpad and LeEco.

Still, the report points out that the company will have to work within Microsoft’s strict guidelines. As important as tying up a major Chinese contract is to Microsoft, Huawei needs Redmond equally. The company is at the forefront of a desire in China to use more locally developed technology.