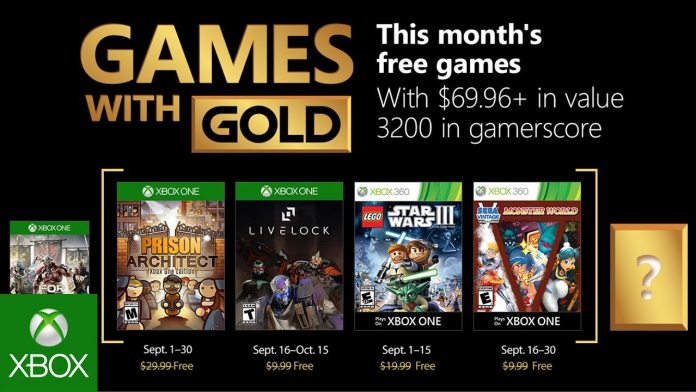 Microsoft has revealed its Games with Gold Lineup for September 2018, with some interesting titles. Next month will see the availability of Prison Architect, Lego Star Wars III, Livelock, and Sega Vintage Collection: Monster World.

The total RRP value of the gold is around $70, with up to 3200 gamerscore up for grabs. As always you’ll need an active Xbox Live Gold subscription to download them and they’ll appear automatically under ‘Ready to Install’.

In terms of the titles themselves, Prison Architect is a clear highlight. It’s the most expensive title and one of the newest. In it, players manage a high-security prison, building the facilities, managing inmates, and more. You have the ability to craft the experience you want, including the ability to ignore human rights or treat inmates with respect.

Across the course of the campaign, wardens have to deal with riots, fires, and hostage situations, ensuring things don’t get out of control. It will be available from September 1–30 on Xbox One.

Lego Star Wars III is arriving on Xbox 360 and Xbox One via backward compatibility. It’s bound to drum up nostalgia and provides a great co-op experience free of charge. This time around, the focus is the Clone Wars, with the appearance of favorites like General Grievous and 115 playable characters.

Though we’re yet to play it, Livelock looks like a literal blast. It’s a twin-stick shooter where players inhabit mechanical chassis and try to fend off enemies with up to 2 friends. On release, it critics praised it for its intriguing story and solid mechanics. It’ll be available from September 16 – October 16 on Xbox One.