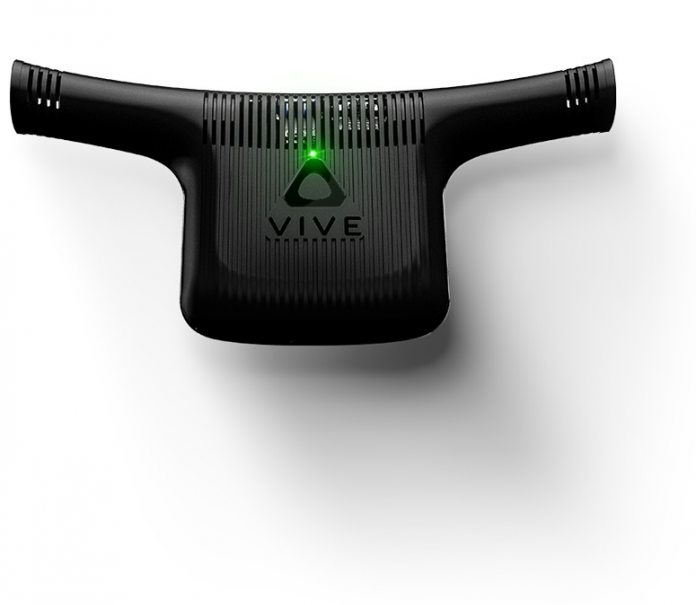 Whether the HTC VIVE is a direct competitor to Windows Mixed Reality is open for debate. The device uses Windows but is a virtual reality machine unlike Microsoft-backed hardware. Either way, HTC has today offered some information on its Vive Wireless Adapter.

As the name of the device suggests, the Vive Wireless Adapter will allow users to wear their headset free from cables. The VR experience on the HTC VIVE could be transformed, allowing users more freedom of movement. At a minimum, the adapter will just make the device easier to use and setup.

Indeed, these are two aspects of the adapter HTC has discussed. The company says installing the Vive Wireless Adapter takes minutes, while it has a 6-meter range and 150-degree field of view. Again, this will vastly open up the virtual space for users to move around their room.

Connecting the Vive Wireless Adapter involves installing a PCI-e card and putting a sensor from the broadcasting PC.

With a wireless connection established, users will have an “interference-free” experience running in a 60GHz band. HTC uses Intel’s WiGig specification alongside DisplayLink’s XR code. The company says this delivers low latency and hours of battery life.

“The VIVE Wireless Adapter, powered by Intel® WiGig, offers a near-zero latency VR experience that’s fast, responsive and offers maximum performance. Build worlds, tear them down, venture into the unknown—all without skipping a beat. Plus, it’s so lightweight, you’ll barely notice it’s there.”

Pre-orders for the Vive Wireless Adapter open on September 5 on Amazon, Best Buy, Microsoft, newEgg, and HTC’s own Vive portal. The costs of the peripheral is a whopping $299, so this is truly for the enthusiast. HTC says the device is compatible with both the Vive and Vive Pro.