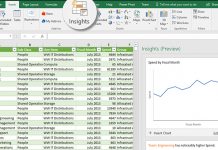 PowerPoint Insiders have received a major update with the introduction of the new Editor. The feature launched in Word last year and contains a number of significant, AI-powered improvements.

The new experience provides a blue underline for grammatical errors, checking as you type. It then lets you choose a grammatical correction, providing synonyms and tips to aid understanding.

It also provides a dotted gold underline for more minor corrections. For example, PowerPoint may suggest that you cut a word for concision or use a different phrase. It puts it much closer to the job of an actual editor and applications like Grammarly.

However, Microsoft’s Patrick Lung says this is the first in a series of improvements. The team is planning to add a number of features to put the editor on par with Word’s and make it accessible.

“Future releases will introduce a new context menu for spelling that will show synonyms alongside suggestions for misspellings and offer an option to have them read aloud,” said Lung. “Additionally, an updated Editor pane will replace the Proofing Pane and offer a more accessible experience, showing the proofing issue in the context of the original sentence within the pane itself and easing choice of the right suggestion by screen reader and keyboard-only users.”

It’s also worth noting that the new implementation means every grammar and style issue won’t be covered. PowerPoint editor learns as it goes, so you shouldn’t rely on it just yet. You’ll also have to opt into Office Intelligent Services to get the feature, which means your mistakes will be sent to Microsoft.