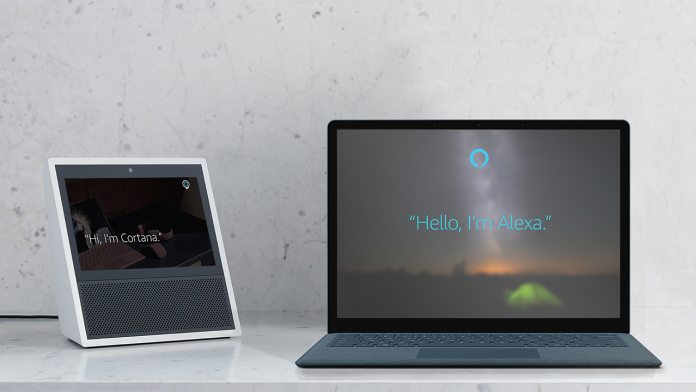 Yesterday, Microsoft finally released a public preview for its Alexa-Cortana integration. The feature was delayed significantly, but the historic collaboration with Amazon has now produced results.

YouTube user TetchyOyvind has trialed the functionality on his Echo Spot and it looks surprisingly at home. Saying the phrase “Alexa, open Cortana” displays the blue rings we’ve come to love.

However, though the integration looks nice, it’s definitely not the fastest. Naturally, using Alexa as a middleman delays the process, but Cortana also seems slow to respond. After the opening invoke, it takes 9-10 seconds until users can ask their question.

Part of this is due to the long phrase, “It’s Cortana, what can I do for you?”. However, there’s also a four-second delay while Cortana opens. All told, it takes 20 seconds for Cortana to answer a simple question about the user’s schedule.

As a result, it’s unlikely users will want to use Cortana on the Echo Spot unless they have to, but it’s still early days. This public preview is a chance for Microsoft to collect user feedback while it makes adjustments behind the curtain.

It’s no secret that the companies have been struggling with the compatibility. In March, the team told Insiders that combining the two speech stacks was proving difficult. There’s a ton of processes going on behind the scenes, and it’s likely we’ll see a number of improvements.

For example, preview users are currently unable to stream music, set alarms, and do a number of other tasks. It stands to reason that Microsoft is prioritizing those over speed, and it says user’s use will inform improvements to the algorithms.

Further, once you’ve opened Cortana, you can keep asking questions, so you won’t have to wait 20 seconds each time. Breakthroughs in conversational AI mean you can ask follow-up questions without stating the context, speeding things up further.