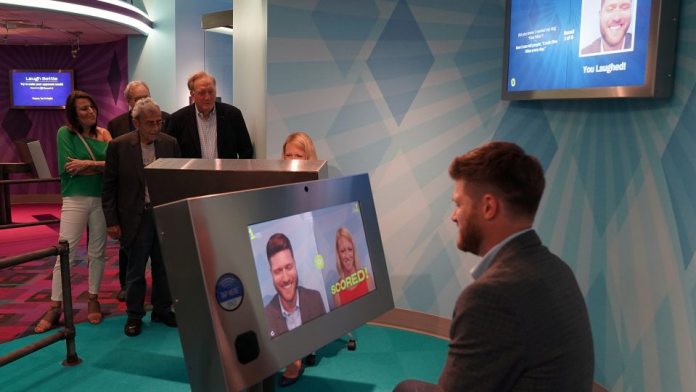 Microsoft has been getting a lot of negative attention for its facial recognition software, but a new video highlights how it can be used for good. In collaboration with Microsoft, the National Comedy Center in New York has created ‘Laugh Battle’.

In its game, two contestants face off to deliver jokes that appear on-screen. If their opponent laughs, they get a point, and the person with the most laughs at the end of six rounds wins.

The idea is to highlight that so much of comedy comes not from the joke itself, but the delivery. However, the Comedy Center faced a challenge in determining when a player was laughing or not.

Eventually, it settled on Microsoft’s Face API, which comes under its Microsoft Cognitive Services umbrella. The deep neural network was trained on 100,000 photos and can recognize a wide degree of emotions, as well as their degree.

“If somebody is smiling or frowning, we can detect that and we give back a score for each emotion,” explained Cornelia Carapcea, principal program manager, Cognitive Services team. “It is not like we see a face and we say ‘happy,’ we see a face and say ‘oh, we think happy is maybe 60 percent.’ If the person is also doing more of a Mona Lisa smile we might have happy 60 percent and sad 40 percent.”

It’s unlikely to be the most complex usage of Microsoft Cognitive Services, but that just shows how simple it is to implement.

“We are making AI accessible to everyone, expanding it beyond the world of developers and data scientists to every person – especially in ways that are universally understood and touch the heart,” said Mitra Azizirad, corporate vice president for AI marketing at Microsoft. “Nothing does that better than laughter.”