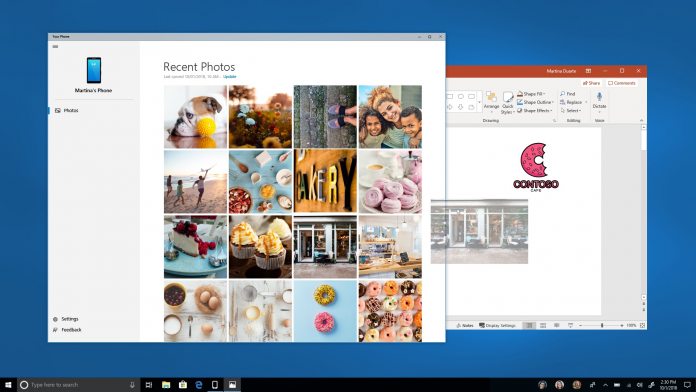 Back at Build 2018 in May, Microsoft discussed its Your Phone solution, a Windows 10 app for mirroring content from phone to a PC. The company is now starting the testing phase of the app, with Android users getting first look.

Your Phone allows users to mirror what appears on a smartphone screen to their PC. Android smartphone users can test the app in a limited capacity. The feature set so far is the ability to drag and drop photos into Office applications and other Microsoft Windows 10 apps directly from a phone.

In other words, users can drag an image from their handset and drop it on their PC. Microsoft says it is also working on adding support for syncing text messaged and general notifications between smartphone and PC.

Users will need to have the Your Phone applications installed on their smartphone to use the ability. We already know Microsoft is planning to bring the feature to iPhone later this fall. This is a rare situation where a Microsoft service comes to Android before Apple’s platform.

Your Phone is testing through the Redstone 5 branch of Windows 10 development. This is the next major Win10 upgrade expected to arrive this fall as the October 2018 Update. Microsoft has not said if Your Phone will ship with that update or will arrive simultaneously as a separate service.

At Build, Microsoft explained that information sent from Your Phone to a PC will not rely on the cloud. Users initially worried about how data would be protected during syncing. Still, the company did not explain the exact details on how it will handle the information away from its servers.

However, Microsoft did not that it is using Microsoft Graph to push information.