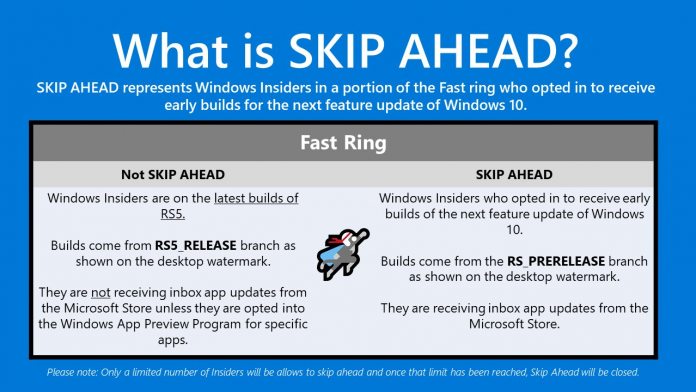 Microsoft has opened enrollment for the Skip Ahead ring after its reset a couple of weeks ago. Users who manage to grab one of the limited spots will be the first to receive Redstone 6 builds and inbox app updates from the Microsoft Store.

The idea is to let dedicated users test the next version before Redstone 5 even releases, getting a head start on development. The result is less strain on Microsoft during its biannual update cycle, though bugs do often slip through.

As you would expect, these builds are even buggier than those in the Fast Ring. They’re not recommended for daily use as many essential apps and services may not work.

The End of ‘Redstone’

The Skip Ahead option was announced almost a year ago and has seen moderate success since. However, Microsoft is going with a different naming convention this time around, ditching the ‘Redstone’ codename for ‘Windows 10 19H1′.

With this move, Microsoft is clearly hoping for more clarity, ’19’ representing the year and ‘H1’ which half it will be released in. Currently, it’s unclear what users should expect with the update other than more Fluent Design elements and features like Sets that didn’t make Redstone 5.

Users who want to enroll despite this can find the option in the usual location. A Windows Insider section under Update & Security will now feature the Skip Ahead button. Microsoft is putting the final touches on its first 19H1 build, so those who enroll can expect one soon.