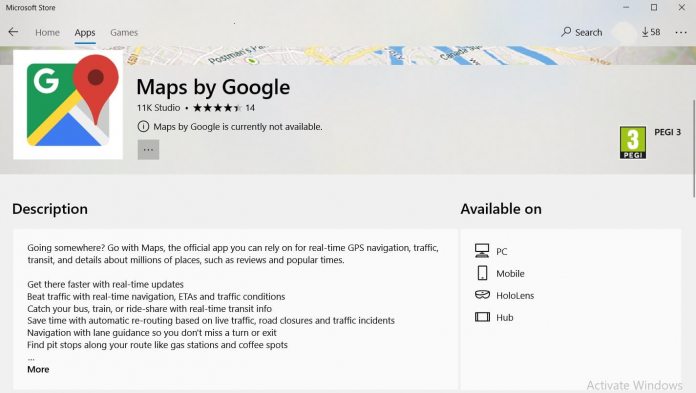 Microsoft has been pushing its progressive web apps (PWAs) on Windows 10 recently. With the potential to solve the app gap on the platform, PWAs need developer support just as UWP does. The Google service PWAs that recently landed on the Microsoft Store were a step forward. However, those apps are now unavailable.

It is worth pointing out that the Google services on the store in Progressive web apps form were not official. Instead, a third-party developer created the apps and published them.

While the apps are now unavailable, the listings for them are still on the Microsoft Store. As developer 11K Studios Interactive is not official, it is possible Google complained or Microsoft acted. However, remember while unofficial the apps simply acted as web wrappers that provided linked access to Google services (Maps, Gmail, etc.).

Microsoft has not offered a reason for the lack of availability. Of course, it is also possible 11K Studios pulled them apps themselves for some reason.

It’s actually a shame because the apps highlighted how important PWAs could be for Windows. The platform has been hampered by a lack of apps, which was a key reason in the demise of Windows 10 Mobile.

While unofficial, the apps showed how we could have a broad set of applications. PWAs allowed us to have Google Photos, Drive, Maps, Docs, Sheets, YouTube Gaming, and Slides, albeit from a third party. Interestingly, Docs and Sheets are still available for download, showing that this was not necessarily Microsoft clamping down on the unofficial nature of the content.

PWAs arrived on Windows 10 during the April 2018 Update (Redstone 4). Progressive Web Apps (PWAs) are web-based applications that are enhanced with modern features. They are regular web page that can be used like a traditional or mobile application.