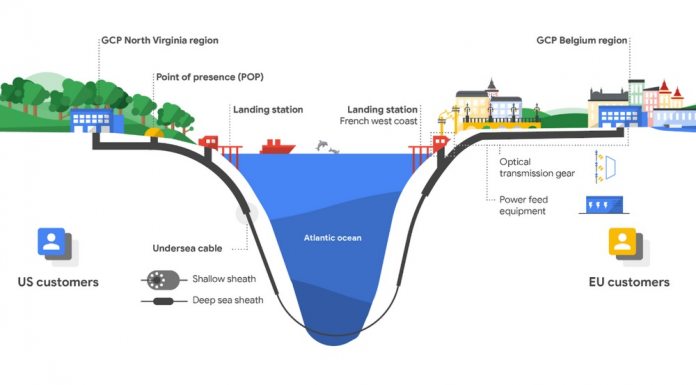 In our age of hyper-connectivity, it is easy to forget data is not transferred by some kind of magical act. We are so used to having access to the connected world at an instant we often forget how we get that access. Underwater or subsea cables deliver fast data connections around the world, and Google is aiming to control its own data destiny.

When discussing subsea cables, it is important to remember most are shared enterprises. Many companies want to deliver super-fast data from one continent to another, so it’s often better to pool resources.

That means most subsea cables are shared by companies in a consortium. Google has been increasingly taking a different route and laying its own underwater lines. The latest is a cable that will run from Virginia Beach in the U.S. to the Atlantic coast of France.

By controlling its own cable network, Google is essentially guaranteeing it owns the connections to its global data centers. The latest subsea cable is Google’s fourth private connection. Called the “Dunant” cable (after Red Cross founder Henry Dunant), the connection will be the company’s longest private route.

Two previous cables were over shorter distances. However, the so-called “Curie” cable connecting Chile and Los Angeles was a foray into longer routes. In a blog post, the company says Dunant will help boost its network capabilities in one of the most important markets:

“Dunant adds network capacity across the Atlantic, supplementing one of the busiest routes on the internet, and supporting the growth of Google Cloud. We’re working with TE SubCom to design, manufacture and lay the cable for Dunant, which will bring well-provisioned, high-bandwidth, low-latency, highly secure cloud connections between the U.S. and Europe.”

TE SubCom is the named contractor on the project. The company will lay the 4,000-mile four-fiber pair connection before a launch in 2020.

Incidentally, Google has certainly not abandoned shared subsea cables. In fact, the company has invested heavily in a new consortium led cable that will be operational in 2019.