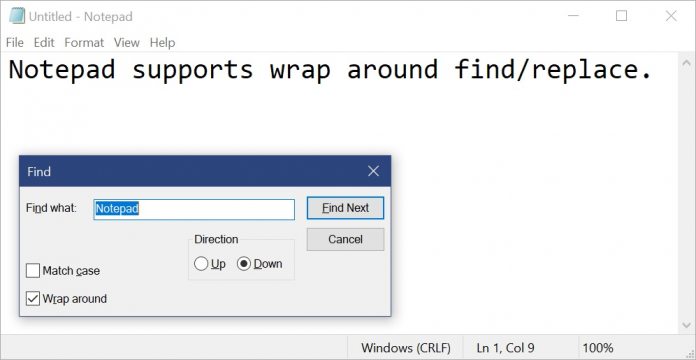 Microsoft’s Notepad application for Windows is among the most stationary apps on the platform. The company has not updated it for years, preferring people use OneNote. Of course, Notepad is more of a text editor and today Microsoft is rolling out its first update in a long time.

After waiting such a long time, users have numerous features that they have wanted for years. Microsoft is checking some of those off the list with this release. It is worth mentioning that while Notepad is not users’ note-taking app, it is still widely used by Windows 10 users for logs, development, and other text editing.

If you have used the service, you will know it is a basic app with a core function that just works. That partly explains why Microsoft does not regularly update Notepad.

Either way, the upcoming release will allow users to create wrap around find and replace. Another new feature is the ability to zoom into text by holding down the ctrl key and scrolling the mouse wheel.

Microsoft is also introducing one of the most requested features:

“Line numbers with word-wrap: A long outstanding request has been to add the ability to display line and column numbers when word-wrap is enabled. This is now possible in Notepad and we’ve made the status bar visible by default. You can still turn the status bar off in the View menu.”

This comprehensive update comes with other changes. For example, Notepad will now open large files more quickly. Users can also delete the previous work by pressing Ctrl + Backspaces, while the arrow keys unselect text and move the cursor.

Microsoft has solved an issue to stop the line and column number resetting to 1 when a file is saved.

At the moment, this update is available as part of Windows 10 Preview Build 17713 on the Insider Program.