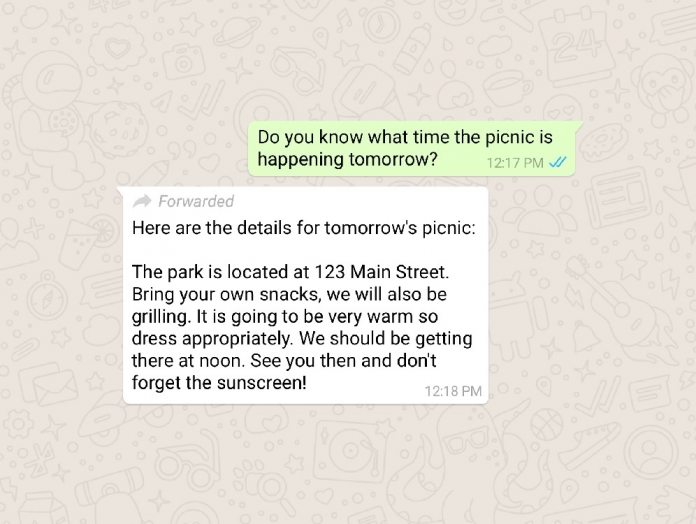 WhatsApp has announced a new feature that makes chat management more detailed. The company has added a forwarded message indicator to chat windows. Users can now see which messages have been forwarded to them and which are written by the contact they are talking to.

Messages that are forwarded on WhatsApp are now denoted by the standard forwarded symbol as shown in the image above.

In a brief blog post today, the Facebook-owned company detailed how the feature works:

“Starting today, WhatsApp will indicate which messages you receive have been forwarded to you. This extra context will help make one-on-one and group chats easier to follow. It also helps you determine if your friend or relative wrote the message they sent or if it originally came from someone else. To see this new forwarded label, you need to have the latest supported version of WhatsApp on your phone.”

Sure, it’s hardly a game-changing addition but is a nice touch nonetheless. As the company has not confirmed which platforms this is coming too, we presume all. That means Android and iOS and maybe even Windows will be getting this forwarded message tag.

That’s a maybe because WhatsApp on Windows is still the old version of the service. We reported last month that Microsoft is working directly with the company on the development of a Universal Windows Platform (UWP) app.

WhatsApp is one of the few developers that has consistently kept its Windows Phone app up-to-date. The current app is based on Silverlight and was launched for Windows 8.1 back in 2014.

By updating and creating a WhatsApp UWP application, the service will work more seamlessly across Windows 10 devices. Whether that means the forwarding message feature will come to the aging app or the upcoming UWP version remains to be seen.