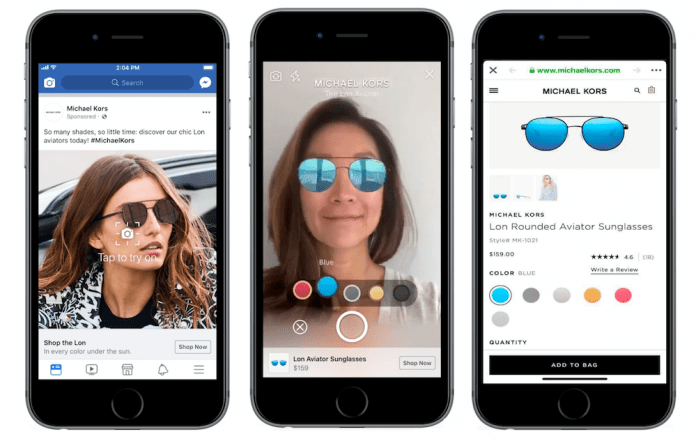 Augmented Reality headsets are yet to take off, but the technology is still alive on mobile. Facebook is taking a page out of Snapchat’s book by testing Augmented Reality ads in the News Feed.

The social media giant has already been using the technique in its Messenger app, and now seems poised for a responsibility wider roll out. It’s testing the ads with partners Micheal Kors, NYX Professional Makeup, Bobby Brown, and more.

Currently, the ads are exclusive to the US and allow you to try on a number of products. The idea is to get users enamored with the way a pair of sunglasses look on them and purchase them. Its implementation looks fairly rudimentary, but the fun aspect is likely to drive more engagement.

Moving Away From Banners

According to TechCrunch, Facebook VP of product marketing Ahmad-Taylor also showed off his face in Candy Crush at a New York marketing event.

“People traditionally have to go into stores to do this,” he said of the sunglasses. “People still really love that experience, but they would like to try it at home.”

With a massive $39.9 billion of its $40.65 billion revenue coming from ads, Facebook has a vested interest in remaining current and offering new ad experiences. It also has a responsibility to ensure those ads haven’t been manipulated, and has pledged a tighter rein going forward.

However, it also seems the social media giant is moving away from an ad model in some regards. The Facebook-owned Instagram recently introduced shopping functionality in stories and will be expanding to all brands soon.